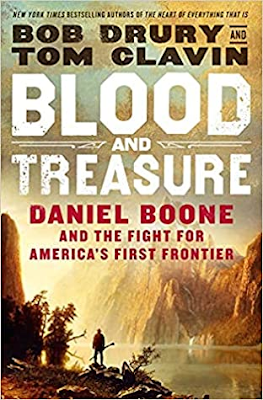 Blood & Treasure: Daniel Boone and the Fight for America's First Frontier by Bob Drury & Tom Clavin
St. Martin's Press
Publication Date: April 20th, 2021
Hardcover. 400 pages.
About Blood & Treasure:
"It is the mid-eighteenth century, and in the 13 colonies founded by Great Britain, anxious colonists desperate to conquer and settle North America’s “First Frontier” beyond the Appalachian Mountains commence a series of bloody battles. These violent conflicts are waged against the Native American tribes whose lands they covet, the French, and finally against the mother country itself in an American Revolution destined to reverberate around the world.
This is the setting of Blood and Treasure, and the guide to this epic narrative is America’s first and arguably greatest pathfinder, Daniel Boone—not the coonskin cap-wearing caricature of popular culture but the flesh-and-blood frontiersman and Revolutionary War hero whose explorations into the forested frontier beyond the great mountains would become the stuff of legend. Now, thanks to painstaking research by two award-winning authors, the story of the brutal birth of the United States is told through the eyes of both the ordinary and larger-than-life men and women, white and red, who witnessed it.
This fast-paced and fiery narrative, fueled by contemporary diaries and journals, newspaper reports, and eyewitness accounts, is a stirring chronicle of the conflict over America’s “First Frontier” that places the reader at the center of this remarkable epoch and its gripping tales of courage and sacrifice."

I'll confess: prior to reading this book, my knowledge of what Daniel Boone actually did was extremely slim. I also have always tended to find myself more interested in world history than U.S. history, so my knowledge on any details from this time period, which includes the French and Indian War, etc. was also pretty slim.

Blood and Treasure was truly a fascinating read, and I found myself absorbed in learning about this time period and about Daniel Boone himself. I will say, however, that although this book is titled Daniel Boone, this felt more like a history of the time period with a focus on the French and Indian war with a focus on Daniel Boone. I'm not complaining about that at all because it was enlightening to finally learn in more detail about events from this period, but it wasn't quite a Boone-heavy as I might have expected it to be (but don't fear, because you will learn  a lot about Boone's life as well!).

Drury and Clavin seem to excel as a nonfiction writing duo and I really appreciated how much obvious research and effort went into writing this book and including a variety of perspectives for different situations. For instance, there were more than a few times where Boone or other figures were kidnapped by a Native tribe, and while the authors could have just included the negatives of this situation I found it really interesting to learn how the kidnapped men were incorporated into their new society. There's nothing black and white about a lot of these situations, and it was helpful to learn more about how all of the interactions occurred.

I also appreciated how Drury and Clavin were able to make this history into a compelling and well-written narrative that I actively enjoyed. I'm a big history fan so it's not that I think history is usually boring or anything, but as I said before, US history has never been a favorite of mine so I was hesitant about whether or not I'd find myself actively engaged. There were, admittedly, a few areas where I felt that Drury and Clavin got a little bogged down in some tangential details about things that weren't exactly the most interesting to me, but these weren't overwhelming and I was always drawn back in when we returned to the narrative of the time period.

As fascinating as it was to learn about this time period, I also found it rather devastating. It's horrible to hear about how cruel men are to one another and how the British and French moved into the US and just start claiming land as their own while wiping out Native peoples and their land. There was a footnote included near the start of the book that due to some of the intense logging that the British and French did in the Northeast, there was an actual global climate effect from that. There was just such a lack of care for anything other than their own interests and it was sad to read about. It was devastating to hear how the British would make treaties with Native people about land borders, and then the British would simply cross those boundaries one day and start claiming the land as their own and having no problems killing those who get in their way. I don't mean to make this so negative and one-sided, but I'm not sure how we can read this history and not feel that so much of what's present today was initially built on bloodshed.

As a last note, I also didn't really know anything about the authors going into this book, so I felt a little hesitant about what to expect from their depictions and descriptions of the indigenous peoples of America and their interactions with the French and British since the framing of this period can often be rather white-centric. I was pleased to see an author's note in the front already relaying their reaching out to representatives from indigenous peoples nations and asking about how to refer to the (for instance, with advice from  they opted to often call them 'Indians' in this book since that is what they were referred to at the time period, etc.). It was also a relief to see that the white people were not portrayed as superior to the Native peoples in any way and that they were indeed depicted as the rather brutal invaders and thieves that they were.

Overall, I've given Blood and Treasure four stars! If you are at all interested in learning a bit more about Daniel Boone, the French and Indian War, or just mid-eighteenth century North America, then I'd certainly recommend you check this one out.

*I received a copy of Blood & Treasure courtesy of the publisher in exchange for an honest review.*