Non-fiction Double (Mini?) Reviews: 1491: New Revelations of the Americas Before Columbus by Charles C. Mann, The Lost City of Z by David Grann 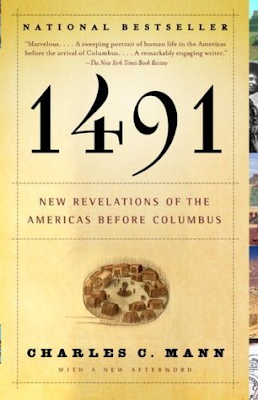 About 1491:
"In this groundbreaking work of science, history, and archaeology, Charles C. Mann radically alters our understanding of the Americas before the arrival of Columbus in 1492.
Contrary to what so many Americans learn in school, the pre-Columbian Indians were not sparsely settled in a pristine wilderness; rather, there were huge numbers of Indians who actively molded and influenced the land around them. The astonishing Aztec capital of Tenochtitlan had running water and immaculately clean streets, and was larger than any contemporary European city. Mexican cultures created corn in a specialized breeding process that it has been called man’s first feat of genetic engineering. Indeed, Indians were not living lightly on the land but were landscaping and manipulating their world in ways that we are only now beginning to understand. Challenging and surprising, this a transformative new look at a rich and fascinating world we only thought we knew."
This book could easily warrant a full review, but I feel like this is a nonfiction where I either have to go into immense detail or keep it "mini," so I'm going with mini in order to pair it with the book that inspired me to read it. I've had this book on my TBR for years, and after I read The Lost City of Z where the author mentions this book as a reference, I figured now was the perfect time to read it, and I'm so glad it did. I've always been interested in learning more about indigenous cultures and history, especially in the Americas, and this book filled in a lot of knowledge gaps (and also created a lot more, in a good way!).
The premise of 1491 is to explore the Americas pre-Columbus, the time period that we rarely learn about in school (in the U.S., at least, in my experience) and that is still relatively ignored by a lot of general history. Sure, people have heard of the Aztecs and the Inkas, but what about the countless other indigenous peoples that lives in the northern and southern Americas for centuries before Europeans arrived? This book explores all of that and does so in an incredibly compelling and engaging manner. Mann breaks down the basic parts of his book into part 1) Indian ecology; part 2) Indian origins; and part 3) Indian ecology. Mann covers the history and rise and fall of various cultures, the different debated theories about how they first came to the Americas (i.e., across the strait between present day Canada and Russia?), and how they built their societies (how they developed agriculture, inventions, etc.). For such an enormous topic, I was impressed by how well Mann managed to convey his well-researched, respectful, and comprehensive information on the aforementioned topics. A lot of people view the Indigenous peoples of the northern and southern Americas as various monolithic entities, and that is far from reality, something that Mann really emphasizes and showcases by focusing in on specific examples and exploring their impact both at the time and up to the modern day.
There are many other books to read about Indigenous peoples to complement this one with more updated research (this was published in 2006, after all), this book really feels indispensable for anyone who is looking to get started and maybe find some jumping off points. This covers so many different regions, time points, and aspects of culture and history that it is hard not to find yourself captivated by some truly pivotal and incredible history that is not nearly taught as thoroughly as often as it should be. I may end up coming back and creating a more expanded review of this book one day, but for now, I hope this convinces you to check it out! I will be searching for even more books on these topics to learn more.
Overall, I've given 1491 five stars! 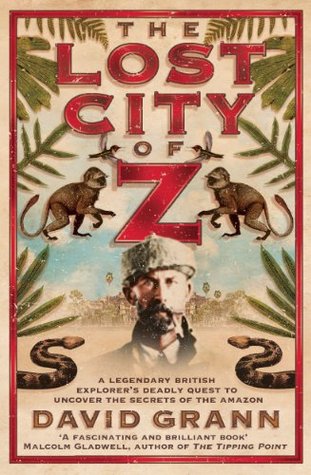 About The Lost City of Z:
"Colonel Percy Harrison Fawcett was the last of a breed of great British explorers who ventured into 'blank spots' on the map with little more than a machete, a compass and unwavering sense of purpose. In 1925, one of the few remaining blank spots in the world was in the Amazon. Fawcett believed the impenetrable jungle held a secret to a large, complex civilization like El Dorado, which he christened the 'City of Z'. When he and his son set out to find it, hoping to make one of the most important archeological discoveries in history, they warned that none should follow them in the event that they did not return. They vanished without a trace. For the next eighty years, hordes of explorers -- shocked that a man many deemed invincible could disappear in a land he knew better than anyone, and drawn by the centuries-old myth of El Dorado -- searched for the expedition and the city. Many died from starvation, disease, attacks by wild animals, and poisonous arrows. Others simply vanished.
In The Lost City of Z, David Grann ventures into the hazardous wild world of the Amazon to retrace the footsteps of the great Colonel Fawcett and his followers, in a bracing attempt to solve one of the greatest mysteries. It is an irresistibly readable adventure story, a subtle examination of the strange and often violent encounters between Europeans and Amazonian tribes and a tale of lethal obsession. "
Nonfiction stories of exploration and survival are, as you may or may not know, one of my favorite things to read, so The Lost City of Z was an immediate 'must-read' when I saw it. This book covers the life and explorations of Colonel Percy Fawcett up until his disappearance in the Amazon during his final expedition with his son, Jack, and his son's friend (it's also since been made into a movie starring Charlie Hunnam which my husband and I watched after I finished this book, and although the movie is well-made and pretty good, it's also not always super accurate in its portrayal of Fawcett, so if you watch the movie just keep that in mind.)
Fawcett was such an interesting person to learn about, and I feel as though he fits in perfectly with other explorers I've read about, all of whom seem to have a sort of extra drive–or obsession, frankly–to accomplish some goal or find some lost myth. For Fawcett, it was to find what he believed was a lost city of gold hidden within the Amazon that was mentioned by Portuguese writers centuries before his explorations. This book explores the myth, its origins, and what the likely reality is, and it also covers Fawcett's entire career from his beginnings in the military and his first 'spy' campaigns to his many different explorations in the Amazon. It isn't even until the latter portion of the book that we embark upon Fawcett's final and most well-known expedition with his son, but everything that comes before was even more captivating than I expected.
In addition to Fawcett, we get to learn a lot about the time period and the entire culture of exploration that grew into and subsequently stemmed from the Royal Geographic Society in London, which I found added a lot of needed context and intrigue to Fawcett's story. The author embarks on his own journey to the Amazon to try to figure out what happened to Fawcett and I thought this added a great layer of storytelling and research that allows the reader to follow along and slowly uncover each step in the same way that both Grann and Fawcett uncovered their journey. Although the mythical lost city of Z likely doesn't exist in the way that Fawcett perceived, Grann explains and shows evidence that there were likely ancient and historical cities that did exist in the Amazon that were far more advanced than many people and historians knew at the time, and that that is probably what the Portuguese writers were talking about. Grann has crafted a supremely compelling and excellent account of a famous explorer whose fate remains unknown (though of course there are some fairly likely leading theories) while interweaving careful research about the history of exploration as well as information about the Amazon and Indigenous peoples that live in the area (which is also what led me to picking up 1491!)
It's another five stars from me!