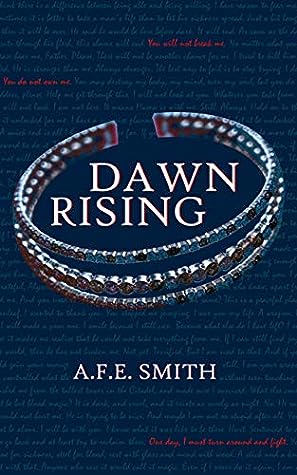 Dawn Rising by A.F.E. Smith
IronWright Books
Publication Date: November 25th, 2020
Ebook. 303 pages.
About Rabbits:
"Alyssia Gale is a daydreamer. A liar. An attention seeker. Everyone she's ever known has found a label to stick on her, but one thing's for sure: she can't be telling the truth. The flashes she sees of the dark and difficult lives of four other people, living in a world that's not her own … they can't be real. Alyssia understands that as well as anyone, even if she does keep catching herself thinking of the people she sees as friends.
Then she's pulled into that other world by blood and dark magic, and realises that everyone she's ever known was wrong.
To start with, her focus is on surviving until she can find a way home. Yet it doesn't take long for her to figure out that where before she was merely a spectator, now she can change things. And with one of her friends being forced into an abusive marriage, and another trapped in the cruellest of prisons, there's plenty that needs changing. She just needs to survive long enough to do it.
What she doesn't know is that something connects her to these four people. Something she never could have imagined. And it's not long before she isn't just fighting to find her place between the worlds – she's fighting to protect her closest friends from a narrative that wants them dead."
Dawn Rising is an exciting modern fantasy that had me hooked from the first page. In Dawn Rising, we follow Alyssia Gale, a girl who’s a bit of a loner due to the fact that she is often lost in her own head because of some rather realistic daydreams she has. The daydreams she has are about another world, Endarion, and four people who inhabit this world—people whose lives Alyssia has become exceptionally invested in.
Alyssia soon becomes entangled directly into these characters lives’ when she falls right into Endarion one day, introducing both the reader and Alyssia to Endarion in a much more obvious manner. I loved the fantasy style of this book and how well Smith captured a mix of excitement and mystery in setting up the basic structure of the story. Alyssia is a very endearing and sympathetic character whose perspective was easy and engaging to follow.  I really appreciated getting some insight into so much of her own internal struggles with herself and doubting her abilities, largely because it set up perfectly for the strength and courage she does discover within herself as the story evolves.
Some of the other characters we meet from Endarion are Oriana, Fabithe, and Torale, all of whom have very unique backstories and personalities that I thought really helped to develop the story. I found Torale to be one of the most compelling of the characters personally and was constantly intrigued by his general personality and the mystery around his past. All of the characters deal with some pretty hard circumstances, and I appreciated how Smith handled all of these topics with care. One of the things I most liked about the characters was there relationships with one another how the dynamics evolved over time. Their interactions and relationships all felt like they moved at a steady pace in development and plotting
The pacing and prose were both consistent and had concise and detailed descriptions and imagery. I was really engaged with this story, and that was partially bolstered by the smooth writing style that Smith employed where I never found myself feeling exceptionally confused or lost. Smith's subtle yet meaningful discussions of mental illnesses, abuse, power dynamics, and more relevant themes was done so well and really helped the story become more than just a story and something that provides insight and thought-provoking content for consideration.

Overall, I've given Dawn Rising four stars! If you're looking for a well-written and engaging modern fantasy story, this is a great choice to check out.

*I received a copy of Dawn Rising courtesy of the author in exchange for an honest review.*