Review: Dreams of the Dying by Nicolas Lietzau 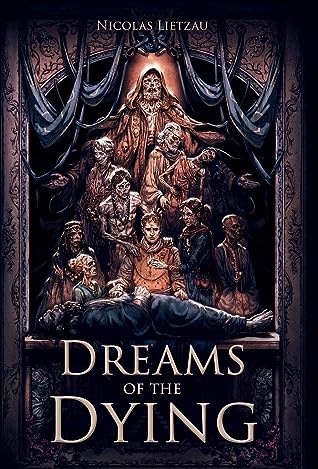 Dreams of the Dying by Nicolas Lietzau (Enderal #1)
Independently Published
Publication Date: December 3rd, 2020
Hardcover. 826 pages.
About Dreams of the Dying:
"If your mind is the enemy, where do you run?
Years after a harrowing war experience, ex-mercenary Jespar Dal'Varek has taken to drifting. It's a lonely existence, but, barring the occasional bout of melancholia, he has found the closest thing to peace a man like him deserves. Life is "all right."
Or so he believes. Hoping to turn the page, Jespar accepts a mysterious invitation into the beautiful but dangerous archipelago of Kilay-and everything changes.
Plagued by explosive social tensions and terrorism, the tropical empire is edging ever closer to civil war. Kilay's merchant king is the only person able to prevent this catastrophe, but he has fallen into a preternatural coma-and it's Jespar's task to figure out what or who caused it. As the investigation takes him across the archipelago and into the king's nightmares, unexpected events not only tie Jespar's own life to the mystery but also unearth inner demons he believed to be long exorcised.
Battling old trauma while fighting for his life, his sanity, and the fate of Kilay, the line between dream and reality blurs until only one question remains: If your mind is the enemy, where do you run?
Described as "Inception in a Polynesian fantasy setting," Dreams of the Dying is a slow-burning, haunting blend of fantasy, mystery, and psychological horror, that explores mental illness, morality, and the dark corners of our minds. "

A few months ago I noticed Petriko Leo of Novel Notions raving about a self-published book called Dreams of the Dying, and when Petrik absolutely raves about a book, I know it's something I need to pick up. And to no one's surprise, this book was incredible. I also splurged and picked up the hardcover, which includes an extensive array of bonus content in the back, including creature artwork, appendices, history/background of the world from the novel, etc.–well worth the extra money!

Dreams of the Dying follows Jespar Dal'Varek, an ex-mercenary who has been drifting ever since leaving the war after a traumatic incident. He is eventually summoned to Kilay where he meets his future employer, new working partner, and embarks upon a mission that will change the course of his life and pretty much most of what he knows. The blurb describes this as a mix of "fantasy, mystery, and psychological horror," and I think that sums it up in the best way possible for what to expect from this book. It's an incredible adventure novel filled with fascinating characters and exciting encounters, but it also gets pretty dark and explores some of the darker aspects of human nature via some psychological themes and elements.

There are many strengths in this book, from the worldbuilding to the characters, so let's start with characters since this was very much a character-driven book. Jesper, our protagonist, was a compelling, complex, and well-developed character whose many internal conflicts and dialogues felt authentic and relatable. This is man who struggles with his own mind because of his past actions and experiences, as well as his present state of life. He's very much a grey character in how he makes his decisions and chooses to approach various obstacles that he comes across, and this is what helps to make him so compelling.

In addition to Jesper are some incredible supporting characters like Lysia, Kawu, Agaam, and an additional POV character that is interspersed occasionally throughout. I really fell in love with all of these characters, all for different reasons, and it was largely because they all seemed like real people with real problems, real flaws, and real conflicts that they had to constantly come to terms with and figure out how to work through. There are also some "villains" in this book, but they are all so varied and have such a layered amount of depth to them that it's impossible to view them as any sort of classic villain; instead, they are fully-developed characters with motivations, backstories, and goals that we as the readers are able to explore and which adds so much nuance to the story. In this same vein, I also appreciated that so many of the main characters that we follow are allowed to have their own diverging opinions that they actually feel strongly about, opinions that they let lead their actions in a very loyal and respectable way, whether they are opinions other characters (or readers) agree with. This also, of course, opens the door for a vast amount of conflict within the group, from minor issues to large ones, and I liked how Lietzau incorporated all of these things into one cohesive narrative.

The world-building was also vibrant and executed with a great level of finesse. Dreams of the Dying is actually set in the same world as the Enderal mod for the game Skyrim–a game which I haven't (yet) played and which was not at all necessary to know anything about before reading this book. This world is vast and teeming with life, culture, and all sorts of creatures, a few of which can be found in the extra sections in more detail in the hardcover edition. I loved that we got to travel around to different areas of this world in the first book, and I really hope we get to explore even more in the second book. The magic system is also fascinating and took me a while to understand (and I'm honestly still not sure if I quite understand everything), but it was exciting to read about nonetheless. Wielders of power are known as dimensionists who are able to produce shifts that vary according to a particular dimensionist's skills and abilities. Doing so also creates drains that physically affect a dimensionist, a trade-off that I always like to see with any sort of magic system.

As someone who faces many of their own mental demons and often considers their mind the enemy sometimes, this whole idea of not knowing where to turn when your mind is against you or untrustworthy resonated with me immensely. There's also a persistent undercurrent of exploring dreams vs. reality that added some great depth to the overarching plotline of the book. There are so many other themes and topics explored in this book, from discussions of power, forms of classism, forgiveness, mental illness, trauma, and so on. There are also some really great philosophical discussions that occurr between the characters throughout the book that I found fascinating and that really encompassed so many of the moral problems that we are faced in society, whether it's a fantasy society or our own society. This book really allows readers to explore ideas and concepts in this book in a way that I found both engaging in relation to the story, and incredibly thought-provoking in regards to my own thoughts and ideas.

The writing and pacing of this book was practically perfect. This was one of those experiences where the book is big (800+ page) and you think it's going to take a while to get through, but somehow you find yourself absolutely flying through it without even realizing it, and before you know it you've reached the end. That, for me, is what I call good writing and how I know that I really enjoyed a book and was able to immerse myself in it. Lietzau's prose is compulsive and highly engaging–if you're intimidated by the page count, just know that once you get into the story, it moves quickly!

Overall, I've given Dreams of the Dying five stars! I cannot wait to read the next installment in this series.

Email ThisBlogThis!Share to TwitterShare to FacebookShare to Pinterest
Labels: dreams of the dying, micolas lietzau, review