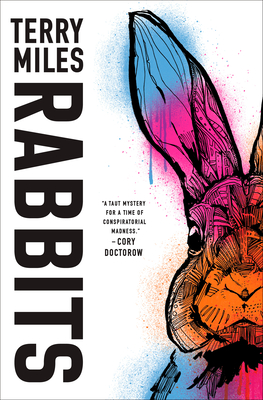 Rabbits by Terry Miles
Del Rey Books
Publication Date: June 8th, 2021
Hardcover. 448 pages.
About Rabbits:
"It's an average work day. You've been wrapped up in a task, and you check the clock when you come up for air--4:44 pm. You go to check your email, and 44 unread messages have built up. With a shock, you realize it is April 4th--4/4. And when you get in your car to drive home, your odometer reads 44,444. Coincidence? Or have you just seen the edge of a rabbit hole?
Rabbits is a mysterious alternate reality game so vast it uses our global reality as its canvas. Since the game first started in 1959, ten iterations have appeared and nine winners have been declared. Their identities are unknown. So is their reward, which is whispered to be NSA or CIA recruitment, vast wealth, immortality, or perhaps even the key to unlocking the secrets of the universe itself. But the deeper you get, the more deadly the game becomes. Players have died in the past--and the body count is rising.
And now the eleventh round is about to begin. Enter K--a Rabbits obsessive who has been trying to find a way into the game for years. That path opens when K is approached by billionaire Alan Scarpio, the alleged winner of the sixth iteration. Scarpio says that something has gone wrong with the game and that K needs to fix it before Eleven starts or the whole world will pay the price.
Five days later, Scarpio is declared missing. Two weeks after that, K blows the deadline and Eleven begins. And suddenly, the fate of the entire universe is at stake."

If you've been looking for a trippy, thought-provoking sci-fi novel, then Rabbits is going to be the book for you. Reading Rabbits is an unpredictable experience full of twists where you truly never know exactly where the story will take you next.

Rabbits is one of those books that is going to make you question a lot. This book actually made me feel pretty justified for having the most bizarre coincidences occur in my life. Have you ever heard of the Baader-Meinhof Phenomenon? It's basically where something that you recently learned or discovered suddenly seems to start popping up everywhere, and that's sort of what happens in my daily life, except it's not something new and there's no way it's things that I'm just noticing more. It's things like it being June 7th, and then I read my book and some major plot point happens on June 7th, and then I'm watching TV later and the date is June 7th. I don't care how you try to justify it, that's just weird. Anyway, to end my rambling–this book is sort of all about coincidences like that and finding connections between things, and doing so means you just might be playing the game Rabbits. Rabbits is an alternate reality game that is completely underground, not meant to be talked about in public, and has some serious legends and myths going around about it and its players–and the drastic measures they'll take to win.

In Rabbits, we follow K, a young man who has been obsessed with Rabbits for years and finds himself suddenly thrown into the game after an unexpected chance encounter with an alleged previous winner of the game who states that something is "wrong" with the game. This is where things in K's life start to get crazy and he ends up teaming up with his good friend Chloe to try to figure out what's going on with the game and why things seem to be going wrong.  K was a really fun character to follow and a strong narrator who really never left any stone unturned when it came to explaining things. This was both a positive and a negative, as I really loved getting explanations about what certain references and past events referred to, as well as gaining a look into K's past, but I also found myself a bit annoyed sometimes when K would constantly interrupt the story to ramble on about something else. Regardless of the narrative style, I found K a pretty competent and enjoyable figure, and his friendship with Chloe worked well with the story. I felt that they had good chemistry with one another and actually used common sense when trying to figure out certain things that were happening, which can sometimes be missing in stories with crazy things happening.

The game of Rabbits itself was easily (and probably predictably) a major highlight for me, and I couldn't get enough of learning about it and its past. I love mysterious games like this that a mix of reality and legend, so slowly learning more about it and uncovering just what and how this game worked was a really enjoyable adventure for me. I did think that some of the more, uh, remarkable and mind-blowing revelations that happens near the latter half of the book were a little difficult to fully wrap my head around and took away a little bit of the fun away, but outside of that I thought it was really well put together and had a lot of unique and exciting elements to it. I also really enjoyed the Seattle setting of this book, and I felt that Miles did a great job of bringing the area to life and really immersing us in the book and world, almost how the characters become immersed in the game without realizing it.

The pacing of Rabbits was the area that I had the biggest issue with. As I mentioned when discussing K, the narrative had a lot of interruptions where K would dive into a multi-page explanation of why something had a certain name, or a story from when he was a kid that explains now why he does a certain thing. While I didn't mind the information that we received from these interruptions, I did mind how much they broke up the story and left things feeling a bit choppy. It's not the most linear narration, and for this book I think that made things a little confusing and unclear at times when I wasn't sure exactly what time period or setting we were in. That sort of fits with the theme of the book and how Rabbits works, but as a reader it just didn't work as well for me.

Overall, Rabbits is an exciting and inventive book and an equally compelling game. I've given it four stars! I will definitely be on the lookout for more from Terry Miles in the future, and I would recommend this one if you think the idea of a mysterious alternate reality game sounds like something fun to explore.

*I received a copy of Rabbits courtesy of NetGalley in exchange for an honest review.*