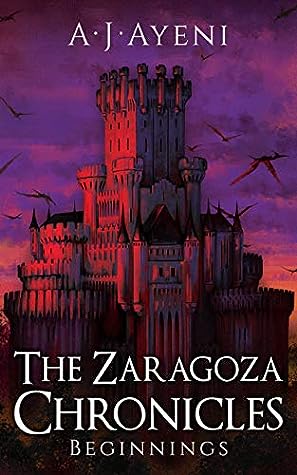 The Zaragoza Chronicles: Beginnings by A.J. Ayeni
Independently Published
Publication Date: February 21st, 2021
Paperback. 452 pages.
About The Zaragoza Chronicles:
"The year is 2040 and wealthy organizations have become the de-facto governments of the world dictating the public policy of many people’s lives.
One organization stands above the rest, the Zaragoza Consultancy Agency, born out of crises from World War II, no other company has reached their levels of success.
Resulting in their family being the richest in the world, showcasing this obscene wealth each year by offering the all-inclusive Zaragoza New Beginnings Scholarship (ZNBS) to be used from college, until the end of each student’s professional career and a guaranteed job at the ZCA after their studies are completed.
The catch is, the ZNBS is only offered to two scholars from each country.
Their benevolence is not all what it seems, and the true stipulations of their generous scholarship is not the only murky thing about their family and the conglomerate they control.
For its prestige and glamour, no one who has received the ZNBS has been able to talk about it, or the mysterious orientation that is completed before it is awarded.
Until a rag-tag group of international scholars form the Zaragoza Resistance Coalition (ZRC) and topple the shadowy company from the inside-out… "

The story is set in the near future of 2040 where the world is largely run by wealthy organizations, the Zaragoza Consulting Agency being one of the most powerful. Each year, Zaragoza offers a select group of students the prestigious Zaragoza New Beginnings Scholarship (ZNBS) that will essentially guarantee them jobs at the agency after they finish. To attain the guarantee and the scholarship, however, the students must first undergo an intense orientation with trials before they can get it--trials that are relatively mysterious in nature because there is nothing known about them or what to expect.

The story follows Femi, a Nigerian American student who acts as the main catalyst for the story when he accepts a scholarships, begins the trials, and starts realizing that things seem a bit… off. I really liked Femi’s character for not only having an interesting personality, but also for his refusal to take things at face value. He immediately questioned Zaragoza’s methods and decisions, wondering why certain students were chosen over others and why everything had to be so mysterious with no real alumni to speak to about the program. He didn’t blindly trust or accept what was told to him and I found this somewhat refreshing to see, as sometimes characters can be a bit too trusting.

In addition to Femi is a huge cast of incredibly diverse characters from a variety of backgrounds and with distinct personalities, motivations, and reasons for accepting the ZNBS. I really appreciated how well they all seemed to interact and I thought it all felt very natural and authentic. It was nice to see how they all managed to work together as well to get to the bottom of what was going on. Rafi in particular was a secondary character that I liked getting to know and who shared a lot of similar sentiments with Femi about Zaragoza,which provided some nice additional perspective to explore. It was also interesting to see how the characters reacted to a supernatural element that appears in the book, but I won’t say much about that so as to avoid spoilers.

The pacing of The Zaragoza Chronicles seemed to move pretty steadily between more fast-paced moments and some longer slow-paced explanations and dialogue. There’s a lot of great action-type moments, but there’s also a lot of dialogue that slowed tings down a bit, although I didn’t really mind that too much because I enjoy hearing from different people. I did find that there were a lot of descriptions that, although offered some interesting background and setting content, also slowed the pacing down and took a little longer to get through. At the end of the day, I always prefer too much rather than too little, so this is usually a more minor issue on my end. In addition, I at times felt that there was perhaps a bit too much going on and I didn’t follow things as well as I might have, but this is also one of those things that may have been a bit of a plot device to build up tension and anticipation.

One thing that I liked about this book was that although it’s basically set in our familiar world, it felt distinct enough that I still found it a compelling escape. An area that I think Ayeni really excelled at was in conveying a wide variety of themes and relevant discussions about some important topics ranging from corruption, power and power balances, racism, and so many more. I thought he did a great job of handling everything in a really nuanced and well-balanced manner that fosters a lot of great discussion and thinking points. I also liked his exploration at diversity in the world and how such diversity can lead to difficult and unique experiences for different people. Everybody’s situation is unique, but we can also find some solidarity in how we approach and overcome things.

*I received a copy of The Zaragoza Chronicles courtesy of the author in exchange for an honest review.*