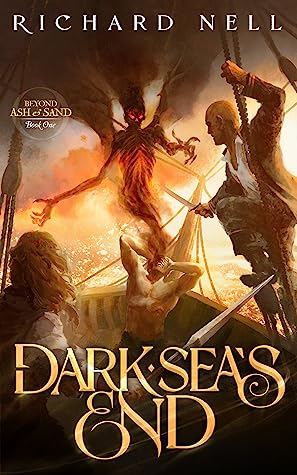 Dark Sea's End (Beyond Ash and Sand #1) by Richard Nell
Independently Published
Publication Date: June 1st, 2021
Ebook.
About Dark Sea's End:
"Feared pirate and scoundrel ‘Lucky’ Chang has a dirty secret: he loves his crew, and would die to protect them. As he’s dragged from prison to face the dark sea and a dangerous new world, he just might have to.
Zaya, warrior and skald from the land of ash, knows she has a destiny. Having left her homeland with only a knife and a dream of adventure, she finds herself captured by pirates. To discover her fate, and become a hero from the book of legends, she must first survive the sea.
With a monstrous pilot as guide, and an ex-assassin as captain, Chang, Zaya, and the crew of the mighty Prince sail into uncharted waters. There they may find new lands and wealth, as well as glory beyond their dreams, or nothing but their doom.
Set in the same epic world as the award winning Kings of Paradise...this new series from author Richard Nell can be read on its own, or as a continuation of the Ash and Sand trilogy."

Dark Sea's End is an adventurous new short fantasy novel from Richard Nell and it felt like such a breath of fresh air to read. It takes place in the same universe as the Ash and Sand trilogy Nell previously wrote (and which I highly recommend)–but don't worry, there's no need to have read the first trilogy to enjoy this one. There are a few characters you may recognize from the first trilogy, but otherwise there's a great new cast of characters to meet and get to know.

This is a fairly short novella-sized story, but it feels like a full novel and is not at all lacking in plot, adventure, or character development. This story is also not as dark as the Ash and Sand trilogy, so if you're looking for somoething slightly less intense but still from Nell, then this is your go to. The writing is perfectly balanced between action, description, and dialogue, and the story itself alternative perspectives between three main characters: that of Chang, Zaya, and Yucat.

Chang is the first character we meet, and we do so after he has been arrested and likely soon to be hanged. Fortunately, there's a bit of a turn in the plot and we end up getting to spend a lot more time with Chang as he works on a new ship with his loyal crew in exchange for their freedom. Chang is a bit of an abrasive person overall, but in a way that's a bit endearing and where you can't help but appreciate how well he fits his role as a tough captain who would do anything for his crew and, although he seems like a bit of a mess at times, actually has a pretty good head on his shoulders.

Zaya's character has an interesting connection to the Ash and Sand trilogy that I'll leave you to discover yourself if you desire, and I found that she added a great additional personality to this book. She is a great foil to Chang's character, though the get along in a some weird and oddly fitting ways. One of the first things we learn about Zaya is that she's a bit of a wannabe-adventurer and free spirit, and that she has a deep admiration for Ruka. Zaya's perspective added some great elements and personality to the narrative, and I particularly liked getting to see her perspectives in contrast to Chang's, as well as some later events that happen that I won't mention due to spoilers.

Lastly is Yucat, a foreign prince whose role doesn't show up right away, but as soon as it did I was immediately hooked on his particular storyline. Yucat is one where I don't really want to say too much because the amount of enjoyment I got from learning about him and his culture is something that I want any new reader to experience as well. Suffice to say, Yucat was one of my favorite and most interesting characters to follow, and I found his conflicts and obligations some of the most compelling.

The world this story is set in was already familiar to me, but if you're new to the world then I have no doubt you'll find this a great introduction that covers some exciting areas and a brief bit of history here and there to firmly build up the world. One thing that I always love about Nell's writing is just how welcoming it feels; some fantasy books have such intricate worlds that it can be hard to dive into them and feel comfortable, but Nell somehow manages to write them in such a way that they still feel (and are) intricate and complex in development but also in a way that allows me to feel right at ease and understand things that are going on, which I greatly appreciate and admire in any author.

If you, like me, are sometimes just looking for a less intense and exciting adventure story with pirates, great characters, and an intriguing plot, then Dark Sea's End is absolutely the next book you should check out. Overall, I've given Dark Sea's End four stars!

*I received a copy of Dark Sea's End courtesy of the author in exchange for an honest review.*