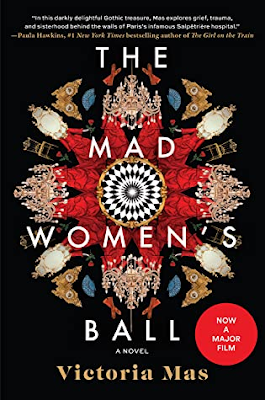 The Mad Women's Ball by Victoria Mas
The Overlook Press
Publication Date: September 7th, 2021
Hardcover. 224 pages.
About The Mad Women's Ball:
"A literary historical novel detailing the horrors faced by institutionalized women in 19th century Paris—soon to be a major film with Amazon Studios
The Salpetriere Asylum: Paris, 1885. Dr. Charcot holds all of Paris in thrall with his displays of hypnotism on women who have been deemed mad and cast out from society. But the truth is much more complicated—these women are often simply inconvenient, unwanted wives, those who have lost something precious, wayward daughters, or girls born from adulterous relationships. For Parisian society, the highlight of the year is the Lenten ball—the Madwomen’s Ball—when the great and good come to gawk at the patients of the Salpetriere dressed up in their finery for one night only. For the women themselves, it is a rare moment of hope.
Genevieve is a senior nurse. After the childhood death of her sister Blandine, she shunned religion and placed her faith in both the celebrated psychiatrist Dr. Charcot and science. But everything begins to change when she meets Eugenie—the 19-year-old daughter of a bourgeois family that has locked her away in the asylum. Because Eugenie has a secret: she sees spirits. Inspired by the scandalous, banned work that all of Paris is talking about, The Book of Spirits, Eugenie is determined to escape from the asylum—and the bonds of her gender—and seek out those who will believe in her. And for that she will need Genevieve's help . . ."

The horrible plight of women who were institutionalized in the previous centuries is something that I am sure most of us are aware of, and it's something that always saddens me to hear about. Still, it's because of this that I find myself interested in learning more about the time period and the experiences of these women in order to make sure we do not ever return to similar behaviors and to honor their struggles. The Mad Women's Ball takes us back to 1885 at the Salpetriere Asylum in Paris where we meet a variety of women involved with the institution, both as patients and nurses, and through Victoria Mas' storytelling we get a peak into these women's difficult and complex lives. Please be aware going into this book that due to the subject and general nature of this story being set in a women's asylum, there are some sensitive and difficult topics broached, and the treatment of some of the women may be difficult to read.

The Mad Women's Ball switches between the narratives of Genevieve, a nurse at Salpetriere, and Eugenie, a young woman from a good family who is sent to the institution due to her claims that she can speak with the spirits of the dead. I really loved getting to experience things from both of these women's different perspectives, and how although they both have their own respective power dynamics between one another, Genevieve also is subject to the power dynamics at play around her at an even higher level. Eugenie is a captivating young woman of incredible intelligence, and it's hard not to feel livid at the world on her behalf. Genevieve, similarly, is an incredibly capable woman who has carved out a life and career for herself as a senior nurse, and I liked seeing how she interacted with, treated, and even thought of her patients (even if it wasn't always overwhelmingly positive). Mas also handles character development incredibly well, and as a result of this there are some rather heartbreaking events that do occur by the end of the story.

Mas is not shy about diving into the practices used against women at asylums from these time periods and how the idea of "mad women" sometimes took on its own salacious life. There are times when the narrative feels as though it is focused solely on conveying the struggles and treatment in a way that feels overdone, but overall I think everything blends nicely and the narrative commentary mostly feels natural and fitting with what is happening on the page. We get a glimpse into the methods doctors used to "treat" these different "mad"women–just about all of which are truly horrifying–and how easy it was for men to discard the women in their lives to an asylum for just about any reason they choose. The women are meant to be going to these institution in order to "get better," but most know that it is simply a way to cast off women, and that no hope is often found (though not impossible to find!).

Overall, I've given The Mad Women's Ball four stars! I really enjoyed and appreciated reading this novel and how much it manages to tell us about the 'asylums' of this period. Victoria Mas performed some excellent research into this topic and crafted a meaningful, tragic, and compelling story featuring two unique women. Highly recommended to anyone who is interested in the subject!

*I received a copy of The Mad Women's Ball courtesy of the publisher in exchange for an honest review.*