Review: My Heart is a Chainsaw by Stephen Graham Jones 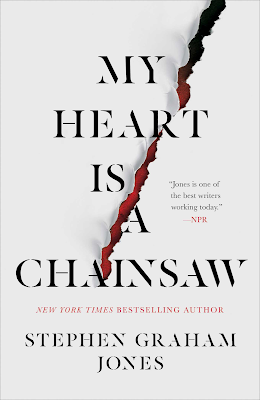 My Heart is a Chainsaw by Stephen Graham Jones
Gallery / Saga Press
Publication Date: August 31st, 2021
Hardcover. 416 pages.
About My Heart is a Chainsaw:
"Shirley Jackson meets Friday the 13th in My Heart Is a Chainsaw, written by the author of The Only Good Indians Stephen Graham Jones, called “a literary master” by National Book Award winner Tananarive Due and “one of our most talented living writers” by Tommy Orange.
Alma Katsu calls My Heart Is a Chainsaw “a homage to slasher films that also manages to defy and transcend genre.” On the surface is a story of murder in small-town America. But beneath is its beating heart: a biting critique of American colonialism, Indigenous displacement, and gentrification, and a heartbreaking portrait of a broken young girl who uses horror movies to cope with the horror of her own life.
Jade Daniels is an angry, half-Indian outcast with an abusive father, an absent mother, and an entire town that wants nothing to do with her. She lives in her own world, a world in which protection comes from an unusual source: horror movies…especially the ones where a masked killer seeks revenge on a world that wronged them. And Jade narrates the quirky history of Proofrock as if it is one of those movies. But when blood actually starts to spill into the waters of Indian Lake, she pulls us into her dizzying, encyclopedic mind of blood and masked murderers, and predicts exactly how the plot will unfold.
Yet, even as Jade drags us into her dark fever dream, a surprising and intimate portrait emerges…a portrait of the scared and traumatized little girl beneath the Jason Voorhees mask: angry, yes, but also a girl who easily cries, fiercely loves, and desperately wants a home. A girl whose feelings are too big for her body. My Heart Is a Chainsaw is her story, her homage to horror and revenge and triumph."

I will admit that I've never really watched that many slashers in my life, but I've read a lot of books that seem to really focus on them from a thematic viewpoint and use them as a jumping off point for a story, which has only increased my interest and prompted me to check them and get more interested on my own. My Heart is a Chainsaw is easily one of the best love letters to slashers that I've ever read, and I absolutely love everything Stephen Graham Jones did with this idea. This book is visceral, raw, passionate, meaningful, and packs a hell of a punch.

The prologue of My Heart is a Chainsaw really sets this book up for what it is-an ode to slashers. This book had a very slow, lazy start that wasn't necessarily hard to get through, but definitely requires the reader to take their time and observe the setting at a leisurely place while slowly getting to know the characters and the area. Once you hit the climactic point of the novel, things really take off and that's when you realize there's no returning to the pacing of the first half. There were a few moments in the first half where I wondered if the story would ever really take off, which is not to say that I didn't enjoy the first half, but I just felt like there was something missing–until I got to the midpoint of the novel and realized that it was all worth it, and that because of the extensive introduction to the characters and the setting, the rest of the story was that much richer and I felt far more connected to it than I would have otherwise. It really brought everything together in a cohesive story, and I am once again impressed by Stephen Graham Jones' writing.

The protagonist, Jade Daniels, is a tough, intelligent, and doing her best to handle a world that never seems to cut her a break. Jade Daniels is, some would say, slightly obsessed with slashers, and has spent much of her life amassing an vast array of knowledge about them, making herself-in my opinion-a bit of an expert. She knows that she could never be a final girl, but she is constantly on the lookout for the ideal final girl in real life, and begins to get perhaps morbidly excited when she discovers that a slasher seemed poised to begin at any moment in her own town. This is also where I feel I can't go into too much more detail about the plot, because everything needs to be left to the reader to discover on their own, I think, so I apologize that things are going to be left a bit vague in this review in regards to story details.

In addition to the plot and story itself, I thought that the author did a particularly great job of creating a setting that had an atmosphere that just screamed "sleepy town where you know something's going to happen." There was a casualness to the writing and description of the town, but not a lazy casualness, more of one that knew exactly how to describe the people, the places, and the general personality of this rural town on the cusp of change. But whether that change will be allowed to happen is up to fate.

My Heart is a Chainsaw also packs a very unexpected emotional punch. I've read enough of Stephen Graham Jones' books at this point to know that there are going to be some deeper themes at play in the narrative, so it's not that I didn't expect it, but I was caught off guard by the topics this book would touch on, and the incredibly thoughtful, careful, and respectful way in which Jones did so.

Overall, I've given My Heart is a Chainsaw 4.5 stars! I really appreciate everything this book was and did, and it has only furthered my desire to continue reading Jones' backlist and look forward to anything and everything new from him!

*I received a copy of My Heart is a Chainsaw courtesy of the publisher in exchange for an honest review.*

Email ThisBlogThis!Share to TwitterShare to FacebookShare to Pinterest
Labels: my heart is a chainsaw, review