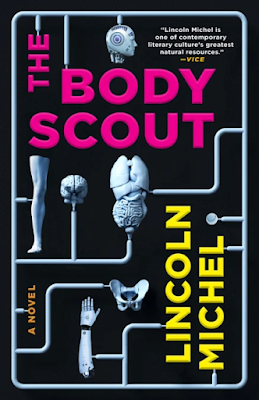 The Body Scout by Lincoln Michel
Orbit
Publication Date: September 21st, 2021
Hardcover. 368 pages.
About The Body Scout:
"In the future you can have any body you want—as long as you can afford it.
But in a New York ravaged by climate change and repeat pandemics, Kobo is barely scraping by. He scouts the latest in gene-edited talent for Big Pharma-owned baseball teams, but his own cybernetics are a decade out of date and twin sister loan sharks are banging down his door. Things couldn't get much worse.
Then his brother—Monsanto Mets slugger J.J. Zunz—is murdered at home plate.
Determined to find the killer, Kobo plunges into a world of genetically modified CEOs, philosophical Neanderthals, and back-alley body modification, only to quickly find he's in a game far bigger and more corrupt than he imagined. To keep himself together while the world is falling apart, he'll have to navigate a time where both body and soul are sold to the highest bidder."

The Body Scout is a fast-paced, innovative futuristic sci-fi with a bit of a 'whodunnit' vibe that keeps the plot moving. This book is set in a world in which body parts can modified and/or replaced, there are modifications for almost all parts of the body (including eyes, ears, and more!), and what constitutes a "natural" person has become much more involved and/or dramatic than we might know it as today.

When I fist started this book, I was excited for the somewhat dystopian futuristic setting, but at the same time when I realized baseball was going to play a decent role in the plot, I grew hesitant. I don't like baseball and honestly find it rather boring--especially talking about it--and wasn't sure how heavily this book would dive into that topic. Fortunately, although there is a decent amount of talk and it does sort of constitute the main career world that Kobo exists in--being both a scout and former player--you do not need to like or care about baseball to like this book. The focus really isn't on that, but rather is used as a backdrop in which to tell a different, grander story of life in this world, and Michel does an excellent job of doing just that.

Once the plot of The Body Scout takes off, it never really slows down. Kobo's adopted brother, a famous baseball player known as J.J. Zunz, dies in a rather dramatic fashion, and Kobo decides that he needs to track down his killer, even though he has no real resources to do so–or at least, so it seems at first. We then follow Kobo along on this crazy, unpredictable adventure full of twists as he tries to find leads and insight towards his brother's death, which of course leads him to uncovering even more corruption and secrets along the way. There's never a dull moment in The Body Scout.

Kobo is a pretty charismatic character in the sense that all he's really trying to do is survive in this rather hostile, unfair futuristic world, and if doing that means he might not be doing everything "right," then that's just what he has to do. It's hard not to root for him struggling in this crazy, harsh world, but his determined yet somewhat casual attitude towards his life and struggles feels somehow relevant to our own often difficult world. I liked seeing Kobo interact with a wide variety of people, from those that like him to those that tolerate him and those that are outright hostile towards him. There were a few side characters that felt a bit more on the stereotypically drawn side, but nothing extreme that really took away from my enjoyment. I really liked getting to know Dolores, an ex of Kobo's that ends up playing an pretty important role throughout the story.

The worldbuilding is incredibly detailed, and the futuristic elements were described and incorporated really well. Although the characters were all mostly developed well and I didn't have many issues with them, I would say Michel's strength in this book was really moreso in the worldbuilding and general layout and structure of society than in anything else. This is not a world that I want to live in or visit, but I had a lot of fun learning how everything worked and how all of the body modifications affected the population (and don't worry, paying for medical bill remains an over-priced problem).

At the end of the day, The Body Scout is a really solid, entertaining, and straight fun novel. It's not all fun and game, and Michel does tackle plenty of more sobering elements and byproducts of a world such as this one, but it's done in a well-written manner that fit in well with the narrative and allowed for some great  thoughtfulness and discussion-prompting. I've given this book four stars!

*I received a copy of The Body Scout courtesy of the publisher in exchange for an honest review.*