Review: The Last House on Needless Street by Catriona Ward 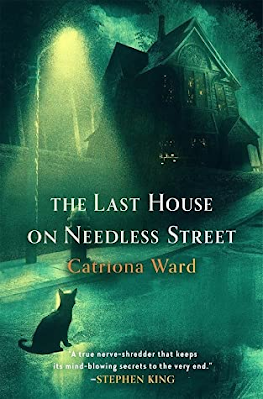 The Last House on Needless Street by Catriona Ward
Nightfire
Publication Date: September 28th 2021
Hardcover. 352 pages.
About The Last House on Needless Street:
"In a boarded-up house on a dead-end street at the edge of the wild Washington woods lives a family of three.
A teenage girl who isn’t allowed outside, not after last time. A man who drinks alone in front of his TV, trying to ignore the gaps in his memory. And a house cat who loves napping and reading the Bible.
An unspeakable secret binds them together, but when a new neighbor moves in next door, what is buried out among the birch trees may come back to haunt them all."

The Last House on Needless Street is a weird book, to say the least, and I loved every minute of it. I have been struggling to stay focused on books (or anything, really) lately, but The Last House on Needless Street had me absolutely hooked and struggling to put it down. This is the best and most engaging psychological thriller that I have read in a while and I simply couldn't get enough of the twists and turns that Ward carefully included throughout that slowly guides the reader towards an unforgettable ending.

This is a particularly difficult book to review because it feels very dependent on the reader not knowing anything and being allowed to come to their own conclusions and make their own discoveries. For that reason, I'll try to keep it mostly vague plot- and character-wise while still telling you what I can about this story. The Last House on Needless Street revolves around a man known as Ted Bannerman, who lives alone with his cat and occasionally his daughter when she visits. We also follow a young woman known as Dee who has moved in to a house next to Ted's in order to spy on him, believing he is the man behind the abduction of her sister many years prior. And this is where we begin to get to know Ted and understand what his life is currently like.

Ted Bannerman led this book in the most intriguing way, and I found myself oddly compelled by his attitude, mannerisms, and overall personality. Do not take this to mean that I necessarily liked him or that he's a charismatic protagonist or anything, because I do not and he most certainly is not. He's a bit of a wild card to me, with the way he tends to lose track of time and end up places he doesn't remember getting to, his deliberately solitary nature, outside of his daughter and cat, and his rather unpredictable trips away from his house, most often into the nearby woods where you can't help but wonder exactly what's going on there.

Throughout the story are flashbacks interspersed between Ted and Dee's chapter perspectives where we get pieces and glimpses from Ted's childhood, which does help to explain where some of his present-day thought patterns derived from, and I appreciated getting to explore these past memories to learn more about Ted and to help further the uncertain atmosphere of the rest of the novel. Adding to the narrative are Ted's regular therapy visits, which he attends mostly so that he can get medication for his daughter. It was interesting to see how Ted interacted with this therapist and how he discussed (or didn't really) certain issues from his. life. The therapist himself is not someone that I would recommend anyone go to, but it was still interesting to see how the two interacted in such a general yet specific way, dancing around the edges of something deeper and darker.

This book takes you down one path, then throws a curveball and makes a big twist, and then, once you think you've finally figured something out, it says "just kidding" and throws you in a different direction. And it feels amazing. There was always an inkling while reading this book that something wasn't as it seemed, but I never really knew exactly what, and that is what made this book such a successful psychological thriller to me. The disturbing, creepy factor was there, but you could never really be sure-truly sure-why it was there.

Overall, I've given The Last House on Needless Street an easy five stars!

*I received a copy of The Last House on Needless Street courtesy of the publisher in exchange for an honest review.*