Review: Under the Whispering Door by TJ Klune 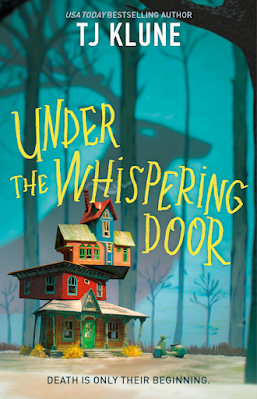 Under the Whispering Door by TJ Klune
Inkyard Press
Publication Date: October 5th, 2021
Hardcover. 480 pages.
About Under the Whispering Door:
"When a reaper comes to collect Wallace Price from his own funeral, Wallace suspects he really might be dead.
Instead of leading him directly to the afterlife, the reaper takes him to a small village. On the outskirts, off the path through the woods, tucked between mountains, is a particular tea shop, run by a man named Hugo. Hugo is the tea shop's owner to locals and the ferryman to souls who need to cross over.
But Wallace isn't ready to abandon the life he barely lived. With Hugo's help he finally starts to learn about all the things he missed in life.
When the Manager, a curious and powerful being, arrives at the tea shop and gives Wallace one week to cross over, Wallace sets about living a lifetime in seven days."

Under the Whispering Door is a wholesome, thoughtful, bittersweet contemporary fantasy story about what happens after we die–specifically, what happens to Wallace Price after his passing from a rather dreary, serious life. And because I've seen a bit of confusion around this, please note that this is not a House in the Cerulean Sea sequel and does not have anything to do with that book, but it does still contain Klune's delightful ideas and plot and has a lot of great things to offer that I think you'll love if you also loved The House in the Cerulean Sea.

As mentioned, this book follows Wallace Price, a recently deceased lawyer who is thrust into the unexpected situation of facing his own life after his death as he discovers what the afterlife really is. Wallace was a rather arrogant and selfish man in his lifetime as a lawyer, and it is with the help of some quirky, endearing characters–including his very own reaper–that he must confront this life and attempt to figure out how to move on from it. I really appreciated Wallace's character development throughout this story, and especially how his relationship with each additional character evolved in their own ways and at their own pace. And it's not only Wallace that undergoes his own development, but every character seemed to have their own unique path that was explored in varying degrees of detail throughout the progression of the story.

Under the Whispering Door takes place almost entirely in one main location–Hugo's tea shop–and I was impressed by how much Klune managed to pack into that one primary setting. There is so much color and depth within the pages of this book and the characters we meet, all developed fully with multi-dimensional personalities and backstories that helped to flesh everything out. The tea shop itself was a delight, from it's quirky description and structure to the various adventures and both light and heavy conversations that take place within. I may not be a fan of tea (I know, I'm sorry), but something about Hugo's passion for tea and finding the right tea for every single person really made me want to go start drinking tea and find deeper meaning and calmness with it, much in the way he does for the people he meets and helps.

This story heavily explores themes of loss, grief, and regret, and I think it does so in a really excellent and effect manner. It was a little saccharine sweet at times in its messaging, and yes this led to it feeling ever so slightly sappy at times, but I think that's exactly what this book was meant to be, and I think it's both what people want from this book and that it works perfectly as a much-needed comfort right now.

My only real complaint about this book would be with the some overdone dialogue and messaging. The themes previously mentioned are explored well in the book, but at times it felt like I was reading variations of the same general ideas over and over again, and it became a bit repetitive and almost dull at times. A lot of the dialogue felt slightly predictable or cliche at times as well, and although this isn't necessarily a bad thing, it did leave me feeling slightly wanting at times. The House in the Cerulean Sea had similar firm elements of instilling messaging that I know some people didn't care for (although it didn't bother me), but this book just felt slightly more repetitive and heavy-handed at times.

Overall, I've given Under the Whispering Door four stars! If you are looking for a wholesome contemporary fantasy read, with both some sadness and hopefulness, then this is the perfect book to pick up.

*I received a copy of Under the Whispering Door courtesy of the publisher and NetGalley in exchange for an honest review.*

Email ThisBlogThis!Share to TwitterShare to FacebookShare to Pinterest
Labels: review, tj klune, under the whispering door