Review: Nothing But Blackened Teeth by Cassandra Khaw 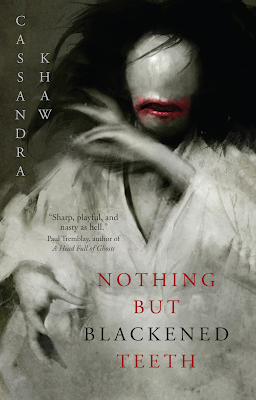 Nothing But Blackened Teeth by Cassandra Khaw
Nightfire
Publication Date: October 19th, 2021
Hardcover. 128 pages.
About Nothing But Blackened Teeth:
"Cassandra Khaw's Nothing But Blackened Teeth is a gorgeously creepy haunted house tale, steeped in Japanese folklore and full of devastating twists.
A Heian-era mansion stands abandoned, its foundations resting on the bones of a bride and its walls packed with the remains of the girls sacrificed to keep her company.
It’s the perfect wedding venue for a group of thrill-seeking friends.
But a night of food, drinks, and games quickly spirals into a nightmare. For lurking in the shadows is the ghost bride with a black smile and a hungry heart.
And she gets lonely down there in the dirt."

Nothing But Blackened Teeth was a very promising horror novella that I'd been anticipating for quite a while, and unfortunately it was... definitely not what I expected. This is a very difficult to review to write and I really didn't even want to write it because, if we're being completely honest with one another, I really disliked this book. I don't really know how it happened and I know so many readers who have really enjoyed and/or even loved this book, but something about it just did not click with me whatsoever and I'm perfectly happy to consider that it's a 'me' problem and not a book problem, but you can decide that for yourself if you choose to read it. Maybe this book just didn't click with me, but regardless, let's talk about this book a bit.

Nothing But Blackened Teeth takes place in Japan in an old, rotting Heian-era mansion. I loved the Japanese folkloric elements and I actually think Khaw did a great job of incorporating those and sharing them in her story. I also did really like the 'lore' of the mansion and the atmosphere Khaw evoked by sharing it amidst the crumbling ruins of the mansion and the many creepy elements of it. Outside of that, however, I pretty much hated everything else about this book. The main problem for me, I think, is that this is set up as what seems to be a character-driven horror with some interesting character dynamics an plenty of baggage, but it was written more as a slasher with less focus on characters and instead a focus on shock, some gore, and some vivid, descriptive writing (which was really nice on its own!).

Since the characters are a central focus of this novella (or so it appears), let's start with them. I get that this is a novella and there's not really much time to explore character dynamics and development, but this story desperately desperately needed it. These characters had so much baggage between themselves that there was absolutely no time for this book to cover even half of it. I found the slow sort of disintegration (?) of their mental states as things in the mansion got progressively more intense completely sudden and it did not flow at all with the story. Actions the characters took did not make any sense and I genuinely kept wondering if maybe I was missing a chunk of the story here and there, as if perhaps my ARC was messed up or something, but sadly, I don't think it was.

The plot premise was promising, but much like the characters, it devolved pretty quickly after the first chapter or so. I remember telling my husband that I think I enjoyed the first couple Kindle pages of my ARC, but after that I really think I kept reading because I kept hoping it would get better, and it was some sort of train wreck I couldn't look away from--and not because I wanted to find out what would happen, but because I just couldn't understand this book.

I think Khaw is a good writer and her prose was really nice and atmospheric–she definitely knows how to set a scene. What I didn't like were her attempts to be clever and somewhat break into a fourth wall style of talking about horror movies. A character would point out that they were just the comic relief and would definitely be the first to die, or mention a cliche horror trope before proceeding to implement said horror trope (fully aware, as it was meant). I don't mind this type of thing and I honestly usually like it, but it just felt so incredibly forced, and it made every other sequence in this plot feel like it was following a very specific set a horror checklists and the author just needed to check off each one, no matter whether it fit or flowed or not. The way things devolved made no sense. I understand in high stress situations, especially possessions and hauntings, things probably get intense very quickly, but these people's reaction made no sense to me. They tended to over- or under-react, and most of the time it was under-reacting.

I didn't really want for this review to be a rant review because I definitely appreciate what Khaw was trying to do with this book and I also very much respect the fact that a lot of people really enjoyed this book, so I'm going to wrap up this review. Personally, it was an enormous flop for me and I cannot say how disappointed I was when I started reading it after hoping it would be one of the best little scary horror novels I'd read this October. If you've read this book, I would love to hear your thoughts on it! Overall, on Goodreads I gave this book one star, which I haven't done in ages, because I was just so frustrated and mad at it. Not sure if that rating will stay there or not, but that's where we're at, apparently!

*I received a copy of Nothing But Blackened Teeth courtesy of the publisher in exchange for an honest review.*