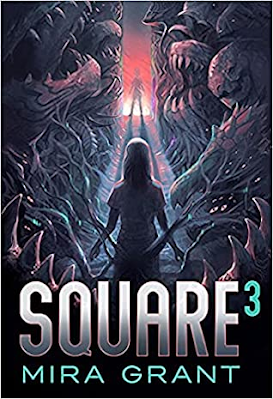 Square³ by Mira Grant
Publication: December 31st, 2021
Hardcover. 144 pages.
Pre-order: Subterranean Press
From Goodreads:
"We think we understand the laws of physics. We think reality is an immutable monolith, consistent from one end of the universe to the next. We think the square/cube law has actual relevance.
We think a lot of things. It was perhaps inevitable that some of them would turn out to be wrong.
When the great incursion occurred, no one was prepared. How could they have been? Of all the things physicists had predicted, “the fabric of reality might rip open and giant monsters could come pouring through” had not made the list. But somehow, on a fine morning in May, that was precisely what happened.
For sisters Susan and Katharine Black, the day of the incursion was the day they lost everything. Their home, their parents, their sense of normalcy…and each other, because when the rift opened, Susan was on one side and Katharine was on the other, and each sister was stranded in a separate form of reality. For Susan, it was science and study and the struggle to solve the mystery of the altered physics inside the zones transformed by the incursion. For Katharine, it was monsters and mayhem and the fight to stay alive in a world unlike the world of her birth.
The world has changed. The laws of physics have changed. The girls have changed. And the one universal truth of all states of changed matter is that nothing can be completely restored to what it was originally, no matter how much you might wish it could be.
Nothing goes back."
Mira Grant's books are always some interesting adventures, and this sounds like no exception to that. I'm not sure what to expect from this (although I feel like I rarely am with her work!), but I'd be curious to find out. 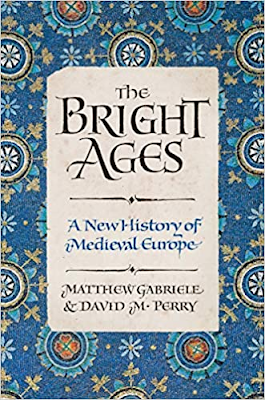 The Bright Ages: A New History of Medieval Europe by Matthew Gabriele & David M. Perry
Publication: December 7th, 2021
Harper
Hardcover. 320 pages.
Pre-order: Amazon | IndieBound
From Goodreads:
"A lively and magisterial popular history that refutes common misperceptions of the European Middle Ages, showing the beauty and communion that flourished alongside the dark brutality—a brilliant reflection of humanity itself.
The word “medieval” conjures images of the “Dark Ages”—centuries of ignorance, superstition, stasis, savagery, and poor hygiene. But the myth of darkness obscures the truth; this was a remarkable period in human history. The Bright Ages recasts the European Middle Ages for what it was, capturing this 1,000-year era in all its complexity and fundamental humanity, bringing to light both its beauty and its horrors.
The Bright Ages takes us through ten centuries and crisscrosses Europe and the Mediterranean, Asia and Africa, revisiting familiar people and events with new light cast upon them. We look with fresh eyes on the Fall of Rome, Charlemagne, the Vikings, the Crusades, and the Black Death, but also to the multi-religious experience of Iberia, the rise of Byzantium, and the genius of Hildegard and the power of queens. We begin under a blanket of golden stars constructed by an empress with Germanic, Roman, Spanish, Byzantine, and Christian bloodlines and end nearly 1,000 years later with the poet Dante—inspired by that same twinkling celestial canopy—writing an epic saga of heaven and hell that endures as a masterpiece of literature today.
The Bright Ages reminds us just how permeable our manmade borders have always been and of what possible worlds the past has always made available to us. The Middle Ages may have been a world “lit only by fire” but it was one whose torches illuminated the magnificent rose windows of cathedrals, even as they stoked the pyres of accused heretics."
I really love the premise of this nonfiction dive into the history of the commonly known "medieval ages" of Europe, and I appreciate that it sounds lie it's going to include a wider expanse of areas outside of Europe as well! I'd love to have a chance to check this one out.