Review: A Registry of My Passage Upon the Earth by Daniel Mason 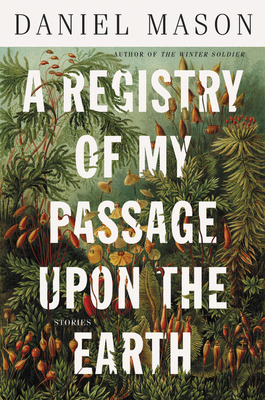 A Registry of My Passage Upon the Earth: Stories by Daniel Mason
Little, Brown and Company
Publication Date: May 5th, 2020
Hardcover. 240 pages.
About A Registry of My Passage Upon the Earth:
"On a fateful flight, a balloonist makes a discovery that changes her life forever. A telegraph operator finds an unexpected companion in the middle of the Amazon. A doctor is beset by seizures, in which he is possessed by a second, perhaps better, version of himself. And in Regency London, a bare-knuckle fighter prepares to face his most fearsome opponent, while a young mother seeks a miraculous cure for her ailing son.
At times funny and irreverent, always moving and deeply urgent, these stories---among them a National Magazine Award and a Pushcart Prize winner---cap a fifteen-year project. From the Nile's depths to the highest reaches of the atmosphere, from volcano-racked islands to an asylum on the outskirts of Rio de Janeiro, these are tales of ecstasy, epiphany, and what the New York Times Magazine called the "struggle for survival...hand to hand, word to word," by "one of the finest prose stylists in American fiction."

A Registry of My Passage Upon the Earth was one of those books that was not on my radar in the slightest until I saw the audiobook on sale and decided to try it out. I own one other book by Daniel Mason, The Winter Soldier, though I've yet to read that one. Still, it was a familiar name and the stories sounded interesting so I decided to give it a shot.

I was taken aback by how much I loved this collection of stories, and nearly every one brought me a great deal of enjoyment and made me really think deeply about their meaning and the characters that make up the story. A Registry of My Passage Upon the Earth is historical fiction spanning a few time periods, all of which take place before the modern world, or so it seemed to me. This collection also has a full cast, which for this collections simply means there's a different narrator for each story, and I think that they were all excellently chosen for each story. Since this is a short story collection, I figured I would highlight a few of my favorites below.

"The Second Doctor Service": This story grabbed me because of how completed shrouded in a sense of mystery it was, and how there was so much unexplained and unknown throughout. Our main character experiences some rather shocking bodily experiences and cannot figure out what exactly is wrong with him, which is sort of the leading basis for the story direction. One thing that I'll mention with a lot of my reviews of these stories is Mason's ability to capture something really special and otherworldly, a sense of magic that masterfully evokes a sense of wonder and awe. This story, for me, is where the collection really takes off and the rest of the stories maintain this thread of magic and awe.

"The Mysterious Discovery of Psammetichus I": If I had to pick one story that doesn't fit the collection it would be this story, but I say that while also thinking it perfectly fits the collection. I know that's confusing, but if you read this collection, you'll understand. This story basically shares a bunch of smaller parables of sorts about the experiments of a man called Psammetichus I, and his experiments tended to center around the raising of children, to put it mildly. I was captivated by this story and thoroughly enjoyed every second of it.

"On Growing Ferns and Other Plants in Glass Cases, in the Midst of the Smoke of London": I adored this story, although I'll admit that the last portion of it was not my favorite. Still, it was an excellent story about a young boy who has what seems to be some sort of extreme asthma while living in the soot-filled city with his mother and regularly has extreme fits of coughing that causes his mother no shortage of worry. As may be expected from the type of stories this collection has had, the coughing fits are not nearly as straightforward as they may seem. I loved the way in which Mason set up this story and slowly led the reader through the mystery and discovery with the boy's mother as they try to figure out what's going on.

"The Line Agent Pascal": This is a particularly short and difficult story to summarize, but I'll do my best in saying that this is simply a story about a telegraph operator living in the Amazon and his interactions and experiences with other telegraph operators in the area. I really can't say what it is exactly about this story that I loved so much, but I can say that it it's one that had a sort of quiet impact that felt as if it had a much deeper undercurrent of sentiment than expected.

"On the Causes of Winds and Waves": This is a slightly longer story, and for good reason because it tells the tale of a balloonist who makes a rather startling and mysterious discovery in the upper reaches of the sky while ballooning one day. This discover is, of course, met with much skepticism from other explorers and researchers, but she cannot forget or give up on her discovery.

Overall, I've given this collection a 4.5 rating because of how much I enjoyed just about every single one of these stories–a rare feat when it comes to short story collections! I loved the themes and sense of wonder that acted as a thread throughout these stories, and they are stories that I know I will continue to think about for a while to come.

Email ThisBlogThis!Share to TwitterShare to FacebookShare to Pinterest
Labels: a registry of my passage upon the earth, daniel mason, review, short stories