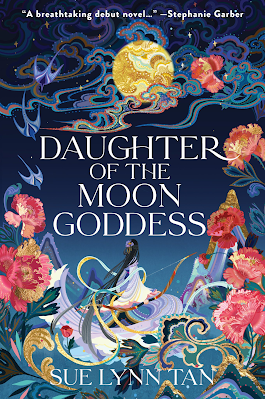 Daughter of the Moon Goddess by Sue Lynn Tan
Publication: January 11th, 2022
Harper Voyager
Hardcover. 512 pages.
Pre-order: Amazon | Bookshop.org
From Goodreads:
"A captivating debut fantasy inspired by the legend of Chang'e, the Chinese moon goddess, in which a young woman’s quest to free her mother pits her against the most powerful immortal in the realm.
Growing up on the moon, Xingyin is accustomed to solitude, unaware that she is being hidden from the feared Celestial Emperor who exiled her mother for stealing his elixir of immortality. But when Xingyin’s magic flares and her existence is discovered, she is forced to flee her home, leaving her mother behind.
Alone, powerless, and afraid, she makes her way to the Celestial Kingdom, a land of wonder and secrets. Disguising her identity, she seizes an opportunity to learn alongside the emperor's son, mastering archery and magic, even as passion flames between her and the prince.
To save her mother, Xingyin embarks on a perilous quest, confronting legendary creatures and vicious enemies across the earth and skies. But when treachery looms and forbidden magic threatens the kingdom, she must challenge the ruthless Celestial Emperor for her dream—striking a dangerous bargain in which she is torn between losing all she loves or plunging the realm into chaos."
This sounds absolutely beautiful and right up my alley! I cannot wait to have a chance to finally dive into this gorgeous book. 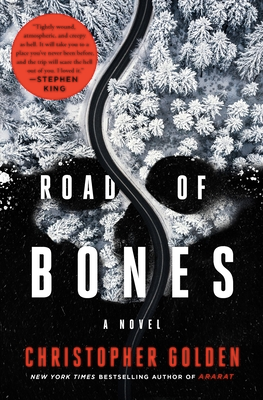 Road of Bones by Christopher Golden
Publication: January 25th, 2022
St. Martin's Press
Hardcover. 240 pages.
Pre-order: Amazon | Bookshop.org
From Goodreads:
"A stunning supernatural thriller set in Siberia, where a film crew is covering an elusive ghost story about the Kolyma Highway, a road built on top of the bones of prisoners of Stalin's gulag.
Kolyma Highway, otherwise known as the Road of Bones, is a 1200 mile stretch of Siberian road where winter temperatures can drop as low as sixty degrees below zero. Under Stalin, at least eighty Soviet gulags were built along the route to supply the USSR with a readily available workforce, and over time hundreds of thousands of prisoners died in the midst of their labors. Their bodies were buried where they fell, plowed under the permafrost, underneath the road.
Felix Teigland, or "Teig," is a documentary producer, and when he learns about the Road of Bones, he realizes he's stumbled upon untapped potential. Accompanied by his camera operator, Teig hires a local Yakut guide to take them to Oymyakon, the coldest settlement on Earth. Teig is fascinated by the culture along the Road of Bones, and encounters strange characters on the way to the Oymyakon, but when the team arrives, they find the village mysteriously abandoned apart from a mysterious 9-year-old girl. Then, chaos ensues.
A malignant, animistic shaman and the forest spirits he commands pursues them as they flee the abandoned town and barrel across miles of deserted permafrost. As the chase continues along this road paved with the suffering of angry ghosts, what form will the echoes of their anguish take? Teig and the others will have to find the answers if they want to survive the Road of Bones."
This recently came to my attention because of a Goodreads giveaway (which I won, so hooray!) and I am so intrigued about the combination of elements in this book. I'm not sure how it's all going to go, but I am so down to try it and can't wait to start reading it.