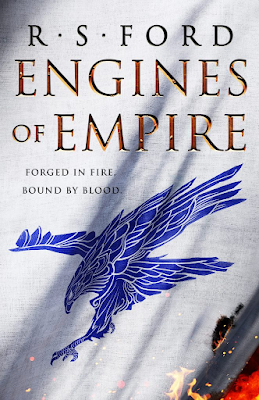 Engines of Empire by R.S. Ford
Publication: January 18th, 2022
Orbit
Paperback. 624 pages.
Pre-order: Amazon | Bookshop.org
From Goodreads:
"This epic fantasy tells the tales of clashing Guilds, magic-fueled machines, intrigue and revolution—and the one family that stands between an empire's salvation or destruction.
The nation of Torwyn is run on the power of industry, and industry is run by the Guilds. Chief among them are the Hawkspurs, and their responsibility is to keep the gears of the empire turning. It’s exactly why matriarch Rosomon Hawkspur sends each of her heirs to the far reaches of the nation.
Conall, the eldest son, is sent to the distant frontier to earn his stripes in the military. It is here that he faces a threat he could have never seen coming: the first rumblings of revolution.
Tyreta’s sorcerous connection to the magical resource of pyrstone that fuels the empire’s machines makes her a perfect heir–in theory. While Tyreta hopes that she might shirk her responsibilities during her journey one of Torwyn’s most important pyrestone mines, she instead finds the dark horrors of industry that the empire would prefer to keep hidden.
The youngest, Fulren, is a talented artificer, and finds himself acting as consort to a foreign emissary. Soon after, he is framed for a crime he never committed. A crime that could start a war.
As each of the Hawkspurs grapple with the many threats that face the nation within and without, they must finally prove themselves worthy–or their empire will fall apart."
I read this one last month and really enjoyed, so I'm really excited to see the final product! This really fits the definition of a big epic fantasy that was a lot of fun. 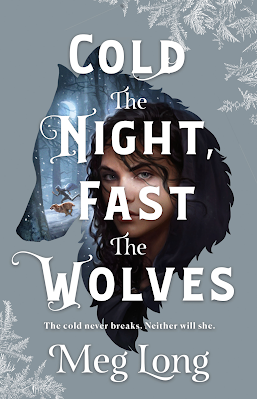 Cold the Night, Fast the Wolves by Meg Long
Publication: January 11th, 2022
Wednesday Books
Hardcover. 368 pages.
Pre-order: Amazon | Bookshop.org
From Goodreads:
"After angering a local gangster, seventeen-year-old Sena Korhosen must flee with her prize fighting wolf, Iska, in tow. A team of scientists offer to pay her way off her frozen planet on one condition: she gets them to the finish line of the planet’s infamous sled race. Though Sena always swore she’d never race after it claimed both her mothers’ lives, it’s now her only option.
But the tundra is a treacherous place, and as the race unfolds and their lives are threatened at every turn, Sena starts to question her own abilities. She must discover whether she's strong enough to survive the wild – whether she and Iska together are strong enough to get them all out alive.
A captivating debut about survival, found family, and the bond between a girl and a wolf that delivers a fresh twist on classic survival stories and frontier myths."
I'm actually currently reading this one and it's been really intriguing so far! Looking forward to seeing it finally release. :)
What do you think about these upcoming releases? What are your anticipated upcoming releases?
Posted by Jordan @ForeverLostinLiterature at 2:00 AM