Mini Thriller Reviews–Winter Style: One by One by Ruth Ware & The Sanatorium by Sarah Pearse 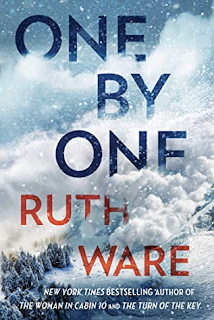 One by One by Ruth Ware
Scout Press
Publication Date: September 8th, 2020
Hardcover. 372 pages.
About One by One:
"Getting snowed in at a beautiful, rustic mountain chalet doesn’t sound like the worst problem in the world, especially when there’s a breathtaking vista, a cozy fire, and company to keep you warm. But what happens when that company is eight of your coworkers…and you can’t trust any of them?
When an off-site company retreat meant to promote mindfulness and collaboration goes utterly wrong when an avalanche hits, the corporate food chain becomes irrelevant and survival trumps togetherness. Come Monday morning, how many members short will the team be?"
One by One is a carefully crafted locked room murder mystery set at a ski chalet in the French Alps. We follow the perspective of Erin, one of the two members of staffing working at chalet, and that of Liz, one of the guests visiting for the company retreat. Unfortunately, what was meant to be a relaxing retreat soon turns into a trip full of tension and eventually fear as one member goes missing and some more sinister things begin to happen.
I have a lot of mixed feelings about this book because I found it compelling and hard to put down while reading, but at the same time I really didn't enjoy one of the POV narratives that much and found many of the characters a bit frustrating. I also sometimes had a difficult time remembering who was who, which is never good in a book where it's important to remember the details. That being said, I think Ware did a great job of crafting a very atmospheric setting where I could really feel and experience the emotions that ran through the group as things seemed to continue to take turns for the worse. I also found myself really enjoying the friendship between Erin and her fellow staff member Danny and appreciated the dynamic that they both brought to the plot and in their interactions with the guests.
This book wasn't quite what I expected by "company retreat gone wrong" because it never once felt like a retreat–it was just tense and uncomfortable the whole time. I initially gave this book four stars after finishing it, but I really think it's more of a 3.5 star overall for me. It was entertaining and kept me engaged, but I don't really feel that much towards it having finished. I would recommend this to anyone looking for a quick thriller set in a snowy, closed mystery setting, but I'm not sure if it's one that will necessarily blow your mind.
Amazon | Bookshop.org 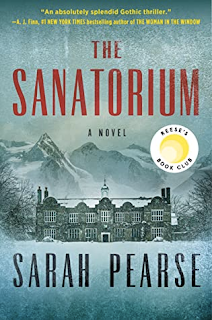 The Sanatorium by Sarah Pearse
Pamela Dorman Books
Publication Date: February 2nd, 2021
Hardcover. 390 pages.
About The Sanatorium:
"An imposing, isolated hotel, high up in the Swiss Alps, is the last place Elin Warner wants to be. But she's taken time off from her job as a detective, so when she receives an invitation out of the blue to celebrate her estranged brother's recent engagement, she has no choice but to accept.
Arriving in the midst of a threatening storm, Elin immediately feels on edge. Though it's beautiful, something about the hotel, recently converted from an abandoned sanatorium, makes her nervous - as does her brother, Isaac.
And when they wake the following morning to discover his fiancée Laure has vanished without a trace, Elin's unease grows. With the storm cutting off access to and from the hotel, the longer Laure stays missing, the more the remaining guests start to panic."

The Sanatorium, much in the same vein as One by One, takes place at a luxury resort in the Swiss Alps and is just as full of tensions and secrets. The resort itself has been converted from an old, closed sanatorium into this new, modern resort, and our main character Elin Warner has been invited to visit for her brother's engagement celebration. But someone goes missing, and another turns up dead, and things take a quick nosedive. And, just like in One by One, a snowstorm and avalanche eventually trap everyone together in the resort.

I enjoyed this one much less than One by One, and that was largely because I really didn't care for the main character and actually found myself somewhat annoyed with her actions and interactions with her fellow characters. I never felt like anyone really liked each other in this book, and I know that sounds like a dumb thing to say in a thriller like this, but there was no real connection between any characters and it made it hard for me to care about them, either. There was just something off about this entire story that I really didn't connect with or care for, and I found myself asking myself why I was reading this at a few too many moments.

I also felt as though the titular sanatorium element was sort of ignored except for when it was relevant, and I was a bit disappointed that this element wasn't utilized more or in a more creative manner.  There were a lot of things that didn't work for me with this book, and the atmosphere didn't really give me that claustrophobic locked room vibe that I look for in books with similar premises. Because of that, I've given The Sanatorium 2.5 stars.

Amazon | Bookshop.org
Posted by Jordan @ForeverLostinLiterature at 2:00 AM

Email ThisBlogThis!Share to TwitterShare to FacebookShare to Pinterest
Labels: one by one, ruth ware, sarah pearse, the sanatorium, thriller