Review: Cold the Night, Fast the Wolves by Meg Long 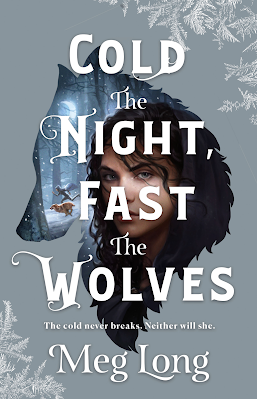 Cold the Night, Fast the Wolves by Meg Long
Wednesday Books
Publication Date: January 11th, 2022
Hardcover. 368 pages.
About Cold the Night, Fast the Wolves:
"After angering a local gangster, seventeen-year-old Sena Korhosen must flee with her prize fighting wolf, Iska, in tow. A team of scientists offer to pay her way off her frozen planet on one condition: she gets them to the finish line of the planet’s infamous sled race. Though Sena always swore she’d never race after it claimed both her mothers’ lives, it’s now her only option.
But the tundra is a treacherous place, and as the race unfolds and their lives are threatened at every turn, Sena starts to question her own abilities. She must discover whether she's strong enough to survive the wild – whether she and Iska together are strong enough to get them all out alive.
A captivating debut about survival, found family, and the bond between a girl and a wolf that delivers a fresh twist on classic survival stories and frontier myths."

Cold the Night, Fast the Wolves is an exhilarating, intense story of friendship, growth, and learning to fight for yourself. If you're a White Fang fan, but wouldn't mind something a bit more intense and futuristic, then look no further than this snowy, adventurous book.

Cold the Night, Fast the Wolves follows Sena, a teen who is essentially living to take care of herself and survive on a harsh, frozen ice planet. The reason this planet is even still inhabited is do to the availability of the much-needed resource of exo-carbon which essentially powers everything else in the galaxy. Because the planet is so hard to inhabit and navigate, the planets holds a large-scale, highly dangerous race once a year where teams battle it out to reach the exo-carbon deposits. These teams travel by sled which are led by genetically altered wolves known as "vonenwolves," which were developed to be able to withstand the brutal conditions of the ice planet. In addition to these racing wolves, there are also a subset of wolves trained and bred purely for fighting entertainment, a premise that I always find hard to read about. (I'm realizing now as I type this that this book is a bit difficult to explain without more context, so hopefully this descriptions makes a little sense!)

We follow the perspective of Sena throughout the story as she faces challenge after challenge while trying to improve her circumstances with the eventual goal of getting off of this brutal ice planet. Sena's mothers died in an exo-carbon race years ago, which has left her with a strong knowledge of wolves and vonenwolves, but a sour taste in her mouth for anything to do with the wolves or races. Of course, circumstances eventually place Sena in the middle of a race where she must adapt and teach her fellow racers how to survive. Accompanying Sena on this journey is Iska, a fighting wolf that I fell in love with pretty much from the start. I could not get enough of watching Sena and Iska's slow, gradual relationship build as they both learn to trust one another and work together. Iska is a grumpy fighting wolf who has a tough life and seems to just want to find someone she can trust and stick around with–without being too obvious about wanting any love, though, of course.

Sena is a tough protagonist whose sheer determination to just keep going was really enjoyable to read. Sometimes I find myself frustrated with characters who seem to have some inhuman ability to just keep going without any real drive, but Sena's motivations were readily apparent the entire time, and her gradual connections to Iska and the people she begins working with added additional influences on her actions and goals. I really appreciated how the author built up these relationships in authentic ways that felt very real and understandable.

The world-building was really carefully and intricately done, and I was impressed by how much detail Long really put into it. I think my only sort of caveat is that I almost feel like the author created this incredibly detailed and interesting world and then didn't have enough natural ways to fit all that information into the story without just throwing it around here and there, if that makes any sense. I'm not really meaning this as a big negative because it didn't take away much from my enjoyment of the story, but it was moreso just an issue where I felt like I had too much information thrown at me without enough story at times. Outside of this, though, the pacing felt very even throughout with plenty of action to keep things moving, and the latter portion of the novel gets pretty heavy with the action if that is your thing. I could've used a little less action at times, but that's truly a personal preference because it never felt out of place, and frankly, the racing portion needs plenty of action!

Cold the Night, Fast the Wolves is a stand out in the YA genre  for me for a number of reasons, including its sci-fi world, cold and snowy setting, the focus on a human and animal bond, and the lack of any overarching romance. If you're looking for something new and exciting, then definitely pick up a copy of this one! Overall, I've given Cold the Night, Fast the Wolves four stars!

*I received a copy of Cold the Night, Fast the Wolves courtesy of the publisher and NetGalley in exchange for an honest review.*