I know, another blog tour... but I couldn't pass this one up because I think this book has such a great premise! I love historical fiction, especially any set around the Romanov family and Russian history, so this is a perfect fit. Below you'll find some information about the book and the author, Bryn Turnbull, as well as an excerpt from the first chapter of the novel! 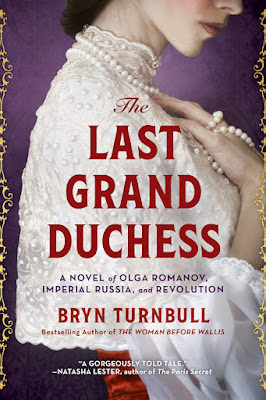 SYNOPSIS:
“This sweeping new novel from the internationally bestselling author of The Woman Before Wallis takes readers behind palace walls to see the end of Imperial Russia through the eyes of Olga Romanov, the first daughter of the last Tsar.
Grand Duchess Olga Romanov comes of age amid a shifting tide for the great dynasties of Europe. But even as unrest simmers in the capital, Olga is content to live within the confines of the sheltered life her parents have built for and her three sisters: hiding from the world on account of their mother’s ill health, their brother Alexei’s secret affliction, and rising controversy over Father Grigori Rasputin, the priest on whom the Tsarina has come to rely. Olga’s only escape from the seclusion of Alexander Palace comes from her aunt, who takes pity on her and her sister Tatiana, inviting them to grand tea parties amid the shadow court of Saint Petersburg. Finally, she glimpses a world beyond her mother’s Victorian sensibilities—a world of opulent ballrooms, scandalous flirtation, and whispered conversation.
But as war approaches, the palaces of Russia are transformed. Olga and her sisters trade their gowns for nursing habits, assisting in surgeries and tending to the wounded bodies and minds of Russia’s military officers. As troubling rumors about her parents trickle in from the Front, Olga dares to hope that a budding romance might survive whatever the future may hold. But when tensions run high and supplies run low, the controversy over Rasputin grows into fiery protest, and calls for revolution threaten to end 300 years of Romanov rule."

Shots rang out across the twilit grounds of Alexander Park. Sit-ting on the window ledge in her father’s study, Olga turned her head toward the sound. She’d heard gunfire in the days and weeks since the riots had broken out in Petrograd, though they’d never sounded so close, so final. Incongruously, she thought not of advancing troops, but of her brother Alexei and his cap-gun, firing at imagined enemies in the grounds where, at this very moment, true monsters stalked between the trees.

Across the room, shrouded in the darkness that had cloaked the palace since the electricity lines were cut days before, Olga’s mother pulled a shawl across her shoulders. Candlelight sent dark flames up the cavernous bookshelves that lined the walls, illuminating her weary face.

Panic gripped her by the throat, and Olga turned to face the window once more. In the deepening gloom, she fancied she could see the orange glow of bonfires. “I don’t understand. In favor of Alexei?” She glanced at Mamma: Alexei’s chronic poor health had always made him seem older than his age, but at twelve, he was still very much a child, and far too young to take on the heavy burden of ruling.

Standing in front of the tsarina, Major General Resin, the commander who’d taken charge of the garrison of troops that protected Olga’s family, cleared his throat. “No, Your Majesty. It’s more complicated than that. We’re still receiving information from the front, but it seems His Imperial Highness was most insistent on the matter. He offered the crown to his brother, Grand Duke Mikhail, but the grand duke refused it. The Duma has formed a provisional government to determine what will happen next, but as I said, we will learn more once His Majesty returns.”

Olga turned her attention back to Mamma, shutting out the continued rattle of gunfire—no closer to the palace walls, but no further away, either. Having spent the last several weeks nursing her siblings through a fierce bout of German measles, Olga had not had the time nor the energy to keep abreast of political developments, but she’d heard enough to know that unrest had been boiling in the capital. Protests in the coal plants; riots in bread lines. Rolling blackouts, hitting tenements and palaces alike; rallies and calls for change, growing ever louder as the war against the Central Powers continued to leech provisions from households and businesses.

From within the white folds of the Red Cross veil she’d worn since the start of the war, Mamma’s face fell, her pale eyes darting around the room. “I don’t understand,” she said. “I simply don’t understand.”

She reached out a thin hand, waving her fingers insistently; recognizing the movement, Olga stepped forward and took it, searching for a logical route through her own confusion. She could hear a buzzing in her head: an insistent roar, the sound of surf crashing against the hull of a ship. With Papa’s abdication, the situation had become everything she’d feared, the sickening finality in the word itself enough to keep it from passing her lips: revolution.

She squeezed Mamma’s hand, watching as Resin’s fingers tightened on the flat brim of his cap. “Where is Papa?”

“He’s coming here, Grand Duchess,” replied Resin, “but in the opinion of the Provisional Government, the palace is not the safest place—not for His Imperial Majesty, and not for you, either. I’m afraid they can no longer guarantee your welfare.”

Mamma looked up sharply. “We have three hundred loyal Cossacks at the gate—the finest soldiers this country has ever produced,” she said, sounding for a moment like her old, fierce self. “They’re loyal to my husband. I fail to see the danger.”

Resin shifted his weight from one foot to the other. “With all due respect, Your Majesty, Minister Rodzianko disagrees. The barracks in Tsarskoe Selo have begun to riot; they’re singing the ‘Marseillaise’ as we speak.”

Mamma paled. Olga recalled visiting the garrison less than a year earlier, trotting on horseback past 40,000 troops all sworn to protect the tsar and his family. How could 40,000 minds be so easily turned?

“And what of my children?” Mamma persisted. “Tatiana can hardly walk. Maria and Anastasia are delirious, and the tsarevich is in a very delicate state—”

“With all due respect, Your Majesty.” Resin met Mamma’s gaze directly. “When the house is in flames, one carries out the children.”

The room fell silent. Despite her attempt at composure, Olga began to shake, a thin, uncontrollable trembling, which, given the darkness of the study, she hoped Resin couldn’t see.

Mamma gripped Olga’s fingers in a silent plea to keep calm. Though her poor health would make it appear otherwise, Mam-ma’s Victorian upbringing had given her a stiff upper lip which Olga and her sisters lacked. She’d been instrumental in running the government since Papa went to command the front, overseeing the distribution of relief aid to soldiers’ families, orchestrating shipments of food and provisions, reining in the government ministers whose political agendas risked the country’s success at the front. Despite what people said about her—despite her Ger-man roots—Mamma had led Russia through the worst of the war years, relying on her faith in God and in Papa to make the decisions others would not.

How had things gone so wrong?

Mamma stood. “We will stay,” she said finally, lifting her chin. “I won’t leave the palace without my husband.” 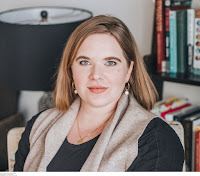 BRYN TURNBULL is the bestselling author of The Woman Before Wallis. Equipped with a master's of letters in creative writing from the University of St. Andrews, a master's of professional communication from Ryerson University and a bachelor's degree in English literature from McGill University, Bryn focuses on finding stories of women lost within the cracks of the historical record. She lives in Toronto.