Can't-Wait Wednesday: The Bladed Faith by David Dalglish & Portrait of a Thief by Grace D. Li 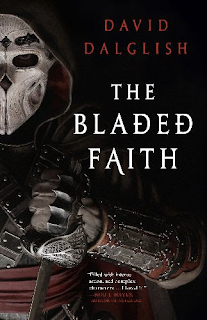 The Bladed Faith (The Vagrant Gods #1) by David Dalglish
Publication: April 5th, 2022
Orbit
Paperbac. 512 pages.
Pre-order: Amazon | Bookshop.org
From Goodreads:
"A usurped prince prepares to take up the mantel of a deadly assassin and reclaim his kingdom, his people, and his slain gods in this epic fantasy from a USA Today bestselling author.
Cyrus was only twelve years old when his gods were slain, his country invaded, and his parents—the king and queen—beheaded in front of him. Held prisoner in the invader's court for years, Cyrus is suddenly given a chance to escape and claim his revenge when a mysterious group of revolutionaries comes looking for a figurehead. They need a hero to strike fear into the hearts of the imperial and to inspire and unite the people. They need someone to take up the skull mask and swords and to become the legendary "Vagrant"—an unparalleled hero and assassin of otherworldly skill.
But all is not as it seems. Creating the illusion of a hero is the work of many, and Cyrus will soon discover the true price of his vengeance."
So I've already read an ARC of this one, but I really enjoyed it and am now super excited for its official release! This was a really compelling and action-packed story of revolutions and people fighting for what they believe in–definitely a worthwhile read!
and... 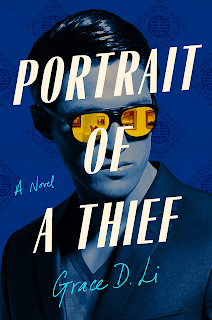 Portrait of a Thief by Grace D. Li
Publication: April 5th, 2022
Tiny Reparations Books
Hardcover. 384 pages.
Pre-order: Amazon | Bookshop.org
From Goodreads:
"Ocean’s Eleven meets The Farewell in Portrait of a Thief, a lush, lyrical heist novel inspired by the true story of Chinese art vanishing from Western museums, about diaspora, the colonization of art, and the complexity of the Chinese American identity.
History is told by the conquerors. Across the Western world, museums display the spoils of war, of conquest, of colonialism: priceless pieces of art looted from other countries, kept even now.
Will Chen plans to steal them back.
A senior at Harvard, Will fits comfortably in his carefully curated roles: a perfect student, an art history major and sometimes artist, the eldest son that has always been his parents’ American Dream. But when a shadowy Chinese corporation reaches out with an impossible—and illegal—job offer, Will finds himself something else as well: the leader of a heist to steal back five priceless Chinese sculptures, looted from Beijing centuries ago.
His crew is every heist archetype one can imagine—or at least, the closest he can get. A conman: Irene Chen, Will’s sister and a public policy major at Duke, who can talk her way out of anything. A thief: Daniel Liang, a premed student with steady hands just as capable of lockpicking as suturing. A getaway driver: Lily Wu, an engineering student who races cars in her free time. A hacker: Alex Huang, an MIT dropout turned Silicon Valley software engineer. Each member of his crew has their own complicated relationship with China and the identity they’ve cultivated as Chinese Americans, but when Will asks, none of them can turn him down.
Because if they succeed? They earn fifty million dollars—and a chance to make history. But if they fail, it will mean not just the loss of everything they’ve dreamed for themselves but yet another thwarted attempt to take back what colonialism has stolen."
This sounds like it has a lot of elements I tend to enjoy, and although I don't always read the most contemporary fiction, I think this is one that might work for me! Can't wait to have a chance to check it out.
What do you think about these upcoming releases? What are your anticipated upcoming releases?
Posted by Jordan @ForeverLostinLiterature at 2:00 AM