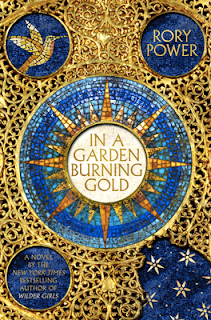 In a Garden Burning Gold (Argyrosi #1) by Rory Power
Publication: April 5th, 2022
Del Rey Books
Hardcover. 432 pages.
Pre-order: Amazon | Bookshop.org
From Goodreads:
"Rhea and her twin brother, Lexos, have spent an eternity helping their father rule their small, unstable country, using their control over the seasons, tides, and stars to keep the people in line. For a hundred years, they've been each other's only ally, defending each other and their younger siblings against their father's increasingly unpredictable anger.
Now, with an independence movement gaining ground and their father's rule weakening, the twins must take matters into their own hands to keep their family—and their entire world—from crashing down around them. But other nations are jockeying for power, ready to cross and double cross, and if Rhea and Lexos aren't careful, they'll end up facing each other across the battlefield."
Would you just look at that dazzling cover? I read Rory Power's Wilder Girls a couple years back and found it interesting in how it played with some different ideas, so I'm very curious to see how Power tackles a much larger plot and story in this one because it sounds really interesting! 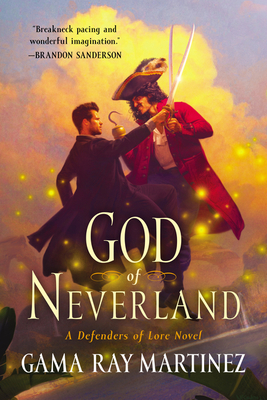 God of Neverland by Gama Ray Martinez
Publication: April 12th, 2022
Harper Voyager
Hardcover. 352 pages.
Pre-order: Amazon | Bookshop.org
From Goodreads:
"Peter Pan is missing; Neverland is in trouble. For adults, that might not matter all that much, but for children--whose dreams and imagination draw strength from the wild god's power--the magic we take for granted in the real world is in danger of being lost forever. Such is the life of a now grown-up Michael Darling. Michael returned from Neverland with the dream of continuing his adventuring ways by joining the Knights of the Round, an organization built to keep humanity safe from magical and mythological threats.. But after a mission gone terribly wrong, he vowed to leave behind the Knights and finally live as a "civilian," finding order and simplicity as a train engineer, the tracks and schedule tables a far cry from the chaos of his youth. He hasn't entered the narrative in years. So what could they need from him now? Maponos--or how he's better known, Peter Pan--has gone missing, and Neverland is now on the edge of oblivion. Michael realizes he has no choice and agrees to one last mission. Alongside the young Knight Vanessa and some old friends, Michael embarks on the ultimate adventure: a journey to a fantasy world to save a god. Determined to stop evil, fight for Neverland, and find Maponos, will Michael be able to save the magical and physical world? Or will his biggest fear come true? The clock is ticking, and in Neverland, that's never a good sign."
Obviously, when I see any sort of Peter Pan retelling or inspired story I have to read said story, so here we are! I am super interested in this particular take and cannot wait to see where this author takes the story.