Can't-Wait Wednesday: The Hacienda by Isabel Cañas & Kagen the Damned by Jonathan Maberry 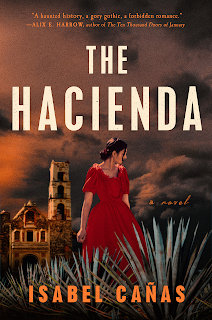 The Hacienda by Isabel Cañas
Publication: May 3rd, 2022
Orbit
Hardcover. 352 pages.
Pre-order: Amazon | Bookshop.org
From Goodreads:
"Mexican Gothic meets Rebecca in this debut supernatural suspense novel, set in the aftermath of the Mexican War of Independence, about a remote house, a sinister haunting, and the woman pulled into their clutches...
In the overthrow of the Mexican government, Beatriz’s father is executed and her home destroyed. When handsome Don Rodolfo Solórzano proposes, Beatriz ignores the rumors surrounding his first wife’s sudden demise, choosing instead to seize the security his estate in the countryside provides. She will have her own home again, no matter the cost.
But Hacienda San Isidro is not the sanctuary she imagined.
When Rodolfo returns to work in the capital, visions and voices invade Beatriz’s sleep. The weight of invisible eyes follows her every move. Rodolfo’s sister, Juana, scoffs at Beatriz’s fears—but why does she refuse to enter the house at night? Why does the cook burn copal incense at the edge of the kitchen and mark its doorway with strange symbols? What really happened to the first Doña Solórzano?
Beatriz only knows two things for certain: Something is wrong with the hacienda. And no one there will help her.
Desperate for help, she clings to the young priest, Padre Andrés, as an ally. No ordinary priest, Andrés will have to rely on his skills as a witch to fight off the malevolent presence haunting the hacienda and protect the woman for whom he feels a powerful, forbidden attraction. But even he might not be enough to battle the darkness.
Far from a refuge, San Isidro may be Beatriz’s doom."
This premise sounds incredibly compelling on its own, but comparing it to both Mexican Gothic and Rebecca makes me all that much more excited. I have an ARC of this that I've been saving for closer to release and I can't wait to start reading it.
and... 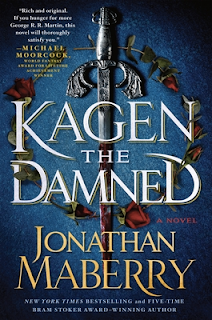 Kagen the Damned by Jonathan Maberry
Publication: April 19th, 2022
Tordotcom
Hardcover. 192 pages.
Pre-order: Amazon | Bookshop.org
From Goodreads:
"Sworn by Oath
Kagen Vale is the trusted and feared captain of the palace guard, charged with protection the royal children of the Silver Empire. But one night, Kagen is drugged and the entire imperial family is killed, leaving the empire in ruins.
Abandoned by the Gods
Haunted and broken, Kagen is abandoned by his gods and damned forever. He becomes a wanderer, trying to take down as many of this enemies as possible while plotting to assassinate the usurper–the deadly Witch-king of Hakkia. While all around him magic–long banished from the world—returns in strange and terrifying ways.
Fueled by Rage
To find the royal children and exact his vengeance, Kagen must venture into strange lands, battle bizarre and terrifying creatures, and gather allies for a suicide mission into the heart of the Witch-king’s empire.
Kings and gods will fear him."
This is another one that I've had an ARC of for a while that I've been saving, and I'm getting more and more intrigued by it as time goes by. I haven't heard much about this one, but I have really high hopes for this new fantasy.