Can't-Wait Wednesday: The Daughter of Doctor Moreau by Silvia Moreno-Garcia & The Pallbearer's Club by Paul Tremblay 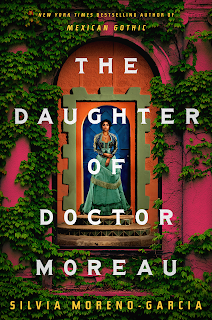 From Goodreads:
"From the New York Times bestselling author of Mexican Gothic and Velvet Was the Night comes a dreamy reimagining of The Island of Doctor Moreau set against the backdrop of nineteenth-century Mexico.
Carlota Moreau: a young woman, growing up in a distant and luxuriant estate, safe from the conflict and strife of the Yucatán peninsula. The only daughter of either a genius, or a madman.
Montgomery Laughton: a melancholic overseer with a tragic past and a propensity for alcohol. An outcast who assists Dr. Moreau with his scientific experiments, which are financed by the Lizaldes, owners of magnificent haciendas and plentiful coffers.
The hybrids: the fruits of the Doctor’s labor, destined to blindly obey their creator and remain in the shadows. A motley group of part human, part animal monstrosities.
All of them living in a perfectly balanced and static world, which is jolted by the abrupt arrival of Eduardo Lizalde, the charming and careless son of Doctor Moreau’s patron, who will unwittingly begin a dangerous chain reaction.
For Moreau keeps secrets, Carlota has questions, and in the sweltering heat of the jungle, passions may ignite."
The Island of Dr. Moreau is a favorite classic of mine and I love stories that act as retellings or are inspired by them (The Madman's Daughter by Megan Shepherd and Dr. Franklin's Island by Ann Halam, to name a few), plus it's from the incredible Silvia Moreno-Garcia so I truly cannot wait to read this. I was fortunate enough to get an ARC of this one and I'm worried I'm too excited, haha.
and... 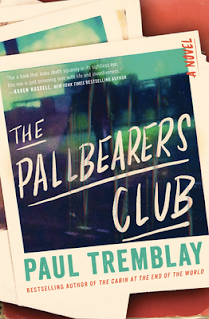 From Goodreads:
"A cleverly voiced psychological thriller about an unforgettable—and unsettling—friendship, with blood-chilling twists, crackling wit, and a thrumming pulse in its veins, from the nationally bestselling author of The Cabin at the End of the World and Survivor Song.
What if the coolest girl you've ever met decided to be your friend?
Art Barbara was so not cool. He was a seventeen-year-old high school loner in the late 1980s who listened to hair metal, had to wear a monstrous back-brace at night for his scoliosis, and started an extracurricular club for volunteer pallbearers at poorly attended funerals. But his new friend thought the Pallbearers Club was cool. And she brought along her Polaroid camera to take pictures of the corpses.
Okay, that part was a little weird.
So was her obsessive knowledge of a notorious bit of New England folklore that involved digging up the dead. And there were other strange things—terrifying things—that happened when she was around, usually at night. But she was his friend, so it was okay, right?
Decades later, Art tries to make sense of it all by writing The Pallbearers Club: A Memoir. But somehow this friend got her hands on the manuscript and, well, she has some issues with it. And now she's making cuts.
Seamlessly blurring the lines between fiction and memory, the supernatural and the mundane, The Pallbearers Club is an immersive, suspenseful portrait of an unusual and disconcerting relationship."
I always enjoy Tremblay's unique and imaginative voice in his horror and am really looking forward to checking this one out!
What do you think about these upcoming releases? What are your anticipated upcoming releases?
Posted by Jordan @ForeverLostinLiterature at 2:00 AM