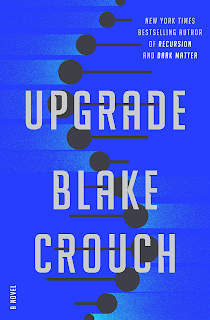 From Goodreads:
"'You are the next step in human evolution.'
At first, Logan Ramsay isn’t sure if anything’s different. He just feels a little . . . sharper. Better able to concentrate. Better at multitasking. Reading a bit faster, memorizing better, needing less sleep.
But before long, he can’t deny it: Something’s happening to his brain. To his body. He’s starting to see the world, and those around him—even those he loves most—in whole new ways.
The truth is, Logan’s genome has been hacked. And there’s a reason he’s been targeted for this upgrade. A reason that goes back decades to the darkest part of his past, and a horrific family legacy.
Worse still, what’s happening to him is just the first step in a much larger plan, one that will inflict the same changes on humanity at large—at a terrifying cost.
Because of his new abilities, Logan’s the one person in the world capable of stopping what’s been set in motion. But to have a chance at winning this war, he’ll have to become something other than himself. Maybe even something other than human.
And even as he’s fighting, he can’t help wondering: what if humanity’s only hope for a future really does lie in engineering our own evolution?
Intimate in scale yet epic in scope, Upgrade is an intricately plotted, lightning-fast tale that charts one man’s thrilling transformation, even as it asks us to ponder the limits of our humanity—and our boundless potential."
I still have yet to read a Blake Crouch book, but I've heard some great things and I think Upgrade sounds like a really interesting concept. I'm reading an ARC of this right and finding it hard to put down!
and... 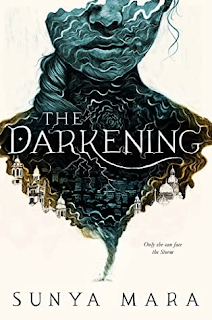 From Goodreads:
"Vesper Vale is the daughter of revolutionaries. Failed revolutionaries. When her mother was caught by the queen’s soldiers, they gave her a choice: death by the hangman’s axe, or death by the Storm that surrounds the city and curses anyone it touches. She chose the Storm. And when the queen’s soldiers—led by a paranoid prince—catch up to Vesper’s father after twelve years on the run, Vesper will do whatever it takes to save him from sharing that fate.
Even arm herself with her father’s book of dangerous experimental magic.
Even infiltrate the prince’s elite squad of soldier-sorcerers.
Even cheat her way into his cold heart.
But when Vesper learns that there’s more to the story of her mother’s death, she’ll have to make a choice if she wants to save her city: trust the devious prince with her family’s secrets, or follow her mother’s footsteps into the Storm."
I'll admit, that cover is what initially drew me to this book, but the synopsis sounds just as compelling! I always enjoy checking out a debut author, so I'm excited to check out Sunya Mara's work.
What do you think about these upcoming releases? What are your anticipated upcoming releases?
Posted by Jordan @ForeverLostinLiterature at 2:00 AM