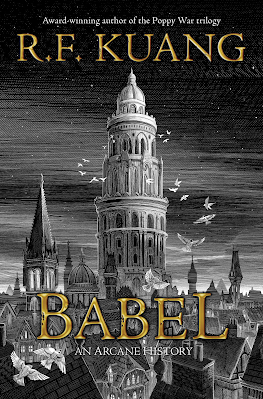 From Goodreads:
"Traduttore, traditore: An act of translation is always an act of betrayal.
1828. Robin Swift, orphaned by cholera in Canton, is brought to London by the mysterious Professor Lovell. There, he trains for years in Latin, Ancient Greek, and Chinese, all in preparation for the day he'll enroll in Oxford University's prestigious Royal Institute of Translation — also known as Babel.
Babel is the world's center of translation and, more importantly, of silver-working: the art of manifesting the meaning lost in translation through enchanted silver bars, to magical effect. Silver-working has made the British Empire unparalleled in power, and Babel's research in foreign languages serves the Empire's quest to colonize everything it encounters.
Oxford, the city of dreaming spires, is a fairytale for Robin; a utopia dedicated to the pursuit of knowledge. But knowledge serves power, and for Robin, a Chinese boy raised in Britain, serving Babel inevitably means betraying his motherland. As his studies progress Robin finds himself caught between Babel and the shadowy Hermes Society, an organization dedicated to sabotaging the silver-working that supports imperial expansion. When Britain pursues an unjust war with China over silver and opium, Robin must decide: Can powerful institutions be changed from within, or does revolution always require violence? What is he willing to sacrifice to bring Babel down?"
I think it's safe to say that this is probably one of the most highly anticipated fantasy releases of the year, and I am just as excited for it as everyone else! I was lucky enough to receive an ARC a while back and have been saving it til closer to its release. I have such high hopes based on this premise and cannot wait to see how it all turns out.
and... 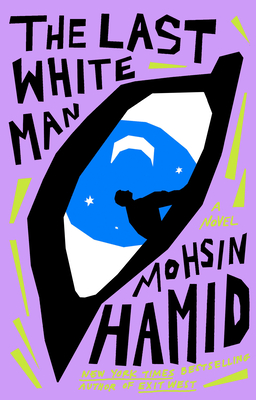 From Goodreads:
"One morning, Anders wakes to find that his skin has turned dark, his reflection a stranger to him. At first he tells only Oona, an old friend, newly a lover. Soon, reports of similar occurrences surface across the land. Some see in the transformations the long-dreaded overturning of an established order, to be resisted to a bitter end. In many, like Anders's father and Oona's mother, a sense of profound loss wars with profound love. As the bond between Anders and Oona deepens, change takes on a different shading: a chance to see one another, face to face, anew.
Hamid's The Last White Man invites us to envision a future - our future - that dares to reimagine who we think we are, and how we might yet be together."
I've really enjoyed some of Mohsin Hamid's  other work and I'm excited to see another new novel from him. This premise sounds like it will be create some really interesting discussion and explorations, so I can't wait to dive in to an ARC that I've been holding onto.
and... 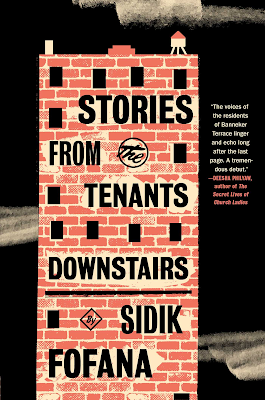 From Goodreads:
"Set in a Harlem high rise, a stunning debut about a tight-knit cast of characters grappling with their own personal challenges while the forces of gentrification threaten to upend life as they know it.
Like Gloria Naylor’s The Women of Brewster Place and Lin Manuel Miranda’s In the Heights, Sidik Fofana’s electrifying collection of eight interconnected stories showcases the strengths, struggles, and hopes of one residential community in a powerful storytelling experience.
Each short story follows a tenant in the Banneker Homes, a low-income high rise in Harlem where gentrification weighs on everyone’s mind. There is Swan in apartment 6B, whose excitement about his friend’s release from prison jeopardizes the life he’s been trying to lead. Mimi, in apartment 14D, who hustles to raise the child she had with Swan, waitressing at Roscoe’s and doing hair on the side. And Quanneisha B. Miles, a former gymnast with a good education who wishes she could leave Banneker for good, but can’t seem to escape the building’s gravitational pull. We root for these characters and more as they weave in and out of each other’s lives, endeavoring to escape from their pasts and blaze new paths forward for themselves and the people they love.
Stories from the Tenants Downstairs brilliantly captures the joy and pain of the human experience and heralds the arrival of a uniquely talented writer."
I've been getting into more short story collections lately (especially on audio!) and I think this one sounds like it'd be a really interesting read. I love the idea of meeting all of these characters who live in this same building and getting a glimpse of their lives.
What do you think about these upcoming releases? What are your anticipated upcoming releases?
Posted by Jordan @ForeverLostinLiterature at 2:00 AM