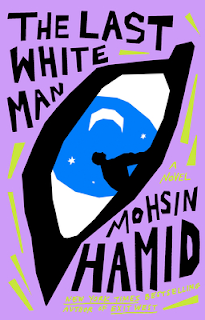 The Last White Man by Mohsin Hamid
Riverhead Books
Publication: August 2nd, 2022
Hardcover. 192 pages.
About The Last White Man:
"One morning, Anders wakes to find that his skin has turned dark, his reflection a stranger to him. At first he tells only Oona, an old friend, newly a lover. Soon, reports of similar occurrences surface across the land. Some see in the transformations the long-dreaded overturning of an established order, to be resisted to a bitter end. In many, like Anders's father and Oona's mother, a sense of profound loss wars with profound love. As the bond between Anders and Oona deepens, change takes on a different shading: a chance to see one another, face to face, anew.
Hamid's The Last White Man invites us to envision a future - our future - that dares to reimagine who we think we are, and how we might yet be together."
I've read and enjoying both The Reluctant Fundamentalist and How to Get Filthy Rich in Rising Asia by Mohsin Hamid and I was so excited to receive an ARC of his latest upcoming release about a world in which people with light skin are suddenly–and randomly–waking up to find that their skin has turned dark. I was really excited to see what this concept would do in the hands of a talented writer like Mohsin Hamid, and I'm a bit mixed on the result.
What I liked: This was such a fascinating concept to explore and I appreciated the Hamid took a more unique and unexpected approach to it. It had a very literary style that very much focused on the characters more prominently than the big event going on, and this did let us get to know the main characters Anders quite well. Hamid really allowed both Anders and Oona to dive deeply into exploring their own identities, both in relation to their sudden onset of dark skin and with the world around them. I really liked what Hamid was trying to do, and his literary style always grabs me. His excessive use of commas and long sentences should be annoying, but for some reason works really well for me.

What I didn't like: A lot of the things I liked are also things I didn't care for, which is a little conflicting. Because of Hamid's more unique and character-focused approach, I don't feel like I really got to explore what this new world looked like with people having their skin randomly transformed from light to dark. We get a lot of general and vague ideas of the chaos that erupts as a result of this, but nothing very concrete and it doesn't seem to take center stage at any point. It was very much about Anders and Oona, their relationship with one another, their relationship with their parents, and their own personal understanding of themselves and what's going on around them. While this worked well, it left me wishing I had gotten more of the actually skin changing plot and how that affected society in a manner that explored it a bit more deeply.

Overall, I've given The Last White Man three stars. This was a really fascinating concept to explore and I appreciated Hamid's deep character study of our two main characters and their identity, but I do wish we had gotten to explore the main concept and how it affected the rest of the world a bit more.

*I received a copy of The Last White Man courtesy of the publisher in exchange for an honest review.*