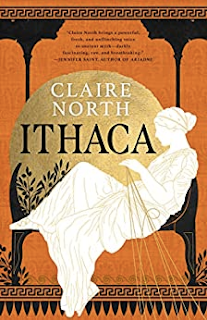 From Goodreads:
"'The greatest power we woman can own, is that we take in secret . . . '
Seventeen years ago, king Odysseus sailed to war with Troy, taking with him every man of fighting age from the island of Ithaca. None of them have returned, and the women have been left behind to run the kingdom.
Penelope was barely into womanhood when she wed Odysseus. Whilst he lived, her position was secure. But now, years on, speculation is mounting that husband is dead, and suitors are starting to knock at her door . . .
But no one man is strong enough to claim Odysseus' empty throne - not yet. Between Penelope's many suitors, a cold war of dubious alliances and hidden knives reigns, as everyone waits for the balance of power to tip one way or another. If Penelope chooses one from amongst them, it will plunge Ithaca into bloody civil war. Only through cunning and her spy network of maids can she maintain the delicate balance of power needed for the kingdom to survive.
On Ithaca, everyone watches everyone else, and there is no corner of the palace where intrigue does not reign..."
I always love a story about Penelope and I'm very curious to see it in Claire North's hands. I just started reading an ARC yesterday and I'm so excited to get into it!
and... From Goodreads:
"Two children trapped in the same attic, almost a century apart, bound by a shared secret.
Early 1900s London: Taken from his homeland, twelve-year-old Celestine spends most of the time locked away in the attic of a large house by the sea. The only time Celestine isn't bound by confines of the small space is when he is acting as an unpaid servant to English explorer Sir Richard Babbington, As the years pass, he desperately clings on to memories of his family in Africa, even as he struggles to remember his mother's face, and sometimes his real name . . .
1974: Lowra, a young orphan girl born into wealth and privilege whose fortunes have now changed, finds herself trapped in the same attic. Searching for a ray of light in the darkness of the attic, Lowra finds under the floorboards an old-fashioned pen, a porcelain doll, a beaded necklace, and a message carved on the wall, written in an unidentifiable language. Providing comfort for her when all hope is lost, these clues will lead her to uncover the secrets of the attic."
This has such an interesting premise that sounds like it will be quite an engrossing read! Hopefully I'll get a chance to check it out. :)
What do you think about these upcoming releases? What are your anticipated upcoming releases?
Posted by Jordan @ForeverLostinLiterature at 2:00 AM