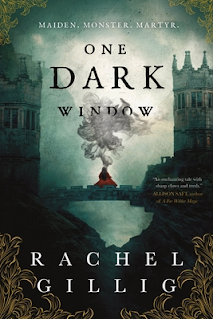 From Goodreads:
"Elspeth Spindle needs more than luck to stay safe in the eerie, mist-locked kingdom of Blunder—she needs a monster. She calls him the Nightmare, an ancient, mercurial spirit trapped in her head. He protects her. He keeps her secrets.
But nothing comes for free, especially magic.
When Elspeth meets a mysterious highwayman on the forest road, her life takes a drastic turn. Thrust into a world of shadow and deception, she joins a dangerous quest to cure Blunder from the dark magic infecting it. And the highwayman? He just so happens to be the King’s nephew, Captain of the most dangerous men in Blunder…and guilty of high treason.
Together they must gather twelve Providence Cards—the keys to the cure. But as the stakes heighten and their undeniable attraction intensifies, Elspeth is forced to face her darkest secret yet: the Nightmare is slowly taking over her mind. And she might not be able to stop him."
This premise sounds fantastic and like it will hopefully have some great characters. Plus, I always love a good monster! Orbit did an amazing job with the cover, as well.
and... 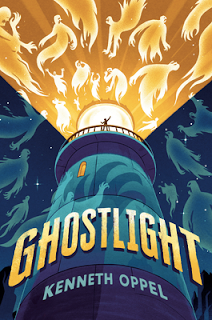 From Goodreads:
"Rebecca Strand was just sixteen when she and her father fell to their deaths from the top of the Gibraltar Point Lighthouse in 1839. Just how they fell--or were they pushed?--remains a mystery. And their ghosts haunt the lighthouse to this day. . . .
Gabe tells this story every day when he gives the ghost tour on Toronto Island. He tries to make it scary enough to satisfy the tourists, but he doesn't actually believe in ghosts--until he finds himself face to face with Rebecca Strand.
The true story of her death is far more terrifying than any ghost tale Gabe has told. Rebecca reveals that her father was a member of the Order, a secret society devoted to protecting the world from "the wakeful and wicked dead"--malevolent spirits like Viker, the ghost responsible for their deaths. But the Order has disappeared, and Viker's ghost is growing ever stronger.
Now Gabe and his friends must find a way to stop Viker before they all become lost souls. . . ."
I had a lot of fun with Oppel's The Boundless when I read it a few years back and I've been meaning to read more from him ever since. I think Ghostlight sounds like it'll be a good one to dive back into his work with!
What do you think about these upcoming releases? What are your anticipated upcoming releases?
Posted by Jordan @ForeverLostinLiterature at 2:00 AM