Can't-Wait Wednesday: Thistlefoot by GennaRose Nethercott & If I Survive You by Jonathan Escoffery 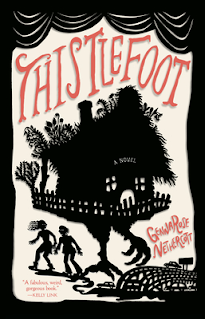 From Goodreads:
"In the tradition of modern fairytales like American Gods and Spinning Silver comes a sweeping epic rich in Eastern European folklore--a debut novel about the ancestral hauntings that stalk us, and the uncanny power of story.
The Yaga siblings--Bellatine, a young woodworker, and Isaac, a wayfaring street performer and con artist--have been estranged since childhood, separated both by resentment and by wide miles of American highway. But when they learn that they are to receive a mysterious inheritance, the siblings are reunited--only to discover that their bequest isn't land or money, but something far stranger: a sentient house on chicken legs.
Thistlefoot, as the house is called, has arrived from the Yagas' ancestral home in Russia--but not alone. A sinister figure known only as the Longshadow Man has tracked it to American shores, bearing with him violent secrets from the past: fiery memories that have hidden in Isaac and Bellatine's blood for generations. As the Yaga siblings embark with Thistlefoot on a final cross-country tour of their family's traveling theater show, the Longshadow Man follows in relentless pursuit, seeding destruction in his wake. Ultimately, time, magic, and legacy must collide--erupting in a powerful conflagration to determine who gets to remember the past and craft a new future."
I'm in the middle of an ARC of this right now and it's very odd, but I'm intrigued!
and... 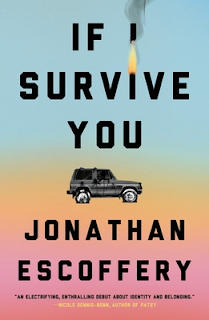 From Goodreads:
"A major debut, blazing with style and heart, that follows a Jamaican family striving for more in Miami, and introduces a generational storyteller.
In the 1970s, Topper and Sanya flee to Miami as political violence consumes their native Kingston. But America, as the couple and their two children learn, is far from the promised land. Excluded from society as Black immigrants, the family pushes on through Hurricane Andrew and later the 2008 recession, living in a house so cursed that the pet fish launches itself out of its own tank rather than stay. But even as things fall apart, the family remains motivated, often to its own detriment, by what their younger son, Trelawny, calls "the exquisite, racking compulsion to survive."
Masterfully constructed with heart and humor, the linked stories in Jonathan Escoffery's If I Survive You center on Trelawny as he struggles to carve out a place for himself amid financial disaster, racism, and flat-out bad luck. After a fight with Topper--himself reckoning with his failures as a parent and his longing for Jamaica--Trelawny claws his way out of homelessness through a series of odd, often hilarious jobs. Meanwhile, his brother, Delano, attempts a disastrous cash grab to get his kids back, and his cousin, Cukie, looks for a father who doesn't want to be found. As each character searches for a foothold, they never forget the profound danger of climbing without a safety net."
This sounds pretty incredible and I'm really hoping I'll have a chance to pick up a copy once it's been published. I believe this is told as a series of connected short stories that also reads like a novel and I have found that I really enjoy that style, so I have high hopes!
What do you think about these upcoming releases? What are your anticipated upcoming releases?
Posted by Jordan @ForeverLostinLiterature at 2:00 AM