Can't-Wait Wednesday: The Witch and the Tsar by Olesya Salnikova Gilmore & Monsters Born and Made by Tanvi Berwah 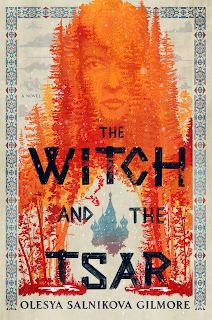 From Goodreads:
"In this stunning debut novel, the maligned and immortal witch of legend known as Baba Yaga will risk all to save her country and her people from Tsar Ivan the Terrible—and the dangerous gods who seek to drive the twisted hearts of men.
As a half-goddess possessing magic, Yaga is used to living on her own, her prior entanglements with mortals having led to heartbreak. She mostly keeps to her hut in the woods, where those in need of healing seek her out, even as they spread rumors about her supposed cruelty and wicked spells. But when her old friend Anastasia—now the wife of the tsar, and suffering from a mysterious illness—arrives in her forest desperate for her protection, Yaga realizes the fate of all of Russia is tied to Anastasia’s. Yaga must step out of the shadows to protect the land she loves.
As she travels to Moscow, Yaga witnesses a sixteenth century Russia on the brink of chaos. Tsar Ivan—soon to become Ivan the Terrible—grows more volatile and tyrannical by the day, and Yaga believes the tsaritsa is being poisoned by an unknown enemy. But what Yaga cannot know is that Ivan is being manipulated by powers far older and more fearsome than anyone can imagine.
Olesya Salnikova Gilmore weaves a rich tapestry of mythology and Russian history, reclaiming and reinventing the infamous Baba Yaga, and bringing to life a vibrant and tumultuous Russia, where old gods and new tyrants vie for power. This fierce and compelling novel draws from the timeless lore to create a heroine for the modern day, fighting to save her country and those she loves from oppression while also finding her true purpose as a goddess, a witch, and a woman."
I'm hoping to start an ARC of this from NetGalley soon and I'm so excited. I really love fantasy based on Russian myth and history, and I always enjoy a Baba Yaga-related tale.
and... 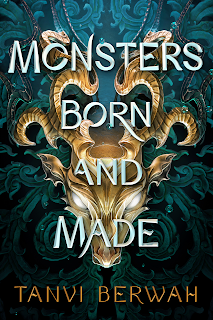 From Goodreads:
"Sixteen-year-old Koral and her older brother Emrik risk their lives each day to capture the monstrous maristags that live in the black seas around their island. They have to, or else their family will starve.
In an oceanic world swarming with vicious beasts, the Landers―the ruling elite, have indentured Koral's family to provide the maristags for the Glory Race, a deadly chariot tournament reserved for the upper class. The winning contender receives gold and glory. The others―if they're lucky―survive.
When the last maristag of the year escapes and Koral has no new maristag to sell, her family's financial situation takes a turn for the worse and they can't afford medicine for her chronically ill little sister. Koral's only choice is to do what no one in the world has ever dared: cheat her way into the Glory Race.
But every step of the way is unpredictable as Koral races against contenders―including her ex-boyfriend―who have trained for this their whole lives and who have no intention of letting a low-caste girl steal their glory. When a rebellion rises and rogues attack Koral to try and force her to drop out, she must choose―her life or her sister's―before the whole island burns."
I am really intrigued and excited about the setting of this world! I also actually haven't read a competition story in a while, so I' excited about that aspect.
What do you think about these upcoming releases? What are your anticipated upcoming releases?
Posted by Jordan @ForeverLostinLiterature at 2:00 AM

Email ThisBlogThis!Share to TwitterShare to FacebookShare to Pinterest
Labels: can't-wait wednesday, cww, monsters born and made, olesya salnikova gilmore, tanvi berwah, the witch and the tsar