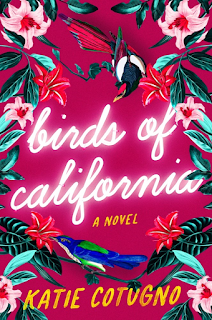 Birds of California by Katie Cotugno
Harper Perennial
Publication: April 26th, 2022
Paperback. 288 pages.
About Birds of California:
"Former child actor Fiona St. James dropped out of the spotlight after a spectacularly public crash and burn. The tabloids called her crazy and self-destructive and said she'd lost her mind. Now in her late twenties, Fiona believes her humiliating past is firmly behind her. She's finally regained a modicum of privacy, and she won't let anything--or anyone--mess it up.
Unlike Fiona, Sam Fox, who played her older brother on the popular television show Birds of California, loves the perks that come with being a successful Hollywood actor: fame, women, parties, money. When his current show gets cancelled and his agent starts to avoid his calls, the desperate actor enthusiastically signs on for a Birds of California revival. But to make it happen, he needs Fiona St. James.
Against her better judgment, Fiona agrees to have lunch with Sam. What happens next takes them both by surprise. Sam is enthralled by Fiona's take-no-prisoners attitude, and Fiona discovers a lovable goofball behind Sam's close-up-ready face. Long drives to the beach, late nights at dive bars... theirs is the kind of kitschy romance Hollywood sells. But just like in the rom-coms Fiona despises, there's a twist that threatens her new love. Sam doesn't know the full story behind her breakdown. What happens when she reveals the truth?"
Birds of California is a vast departure from the types of books I usually read, and I found it to be a really compelling contemporary story with some romance, self-discovery, and all-around good times. This story follows Fiona St. James, former child star whose life went a bit off the rails near the end of her TV show's run, as she continues to navigate her post-stardom life as off the grid as possible (while still living in LA areas) and the sudden reintroduction of her former co-star and friend Sam Fox–who is still acting, though struggling to make it big–into her life.
What I liked: Birds of California was a really endearing contemporary romance that hit a lot of heavier notes than I expected, and I actually really appreciated that this book explored some of these topics, such as feeling lost in your own life and where you're going, past traumas, and more. I actually didn't realize that this was going to have a romance when I picked it up (maybe I didn't read the blurb enough??), but I thought it was a really endearing and compelling one between two very passionate people with very different personalities. I had a lot of fun going on this ride with Fiona and Sam, including all of the ups and downs and discoveries that took place along the way. This was a really easy to read story that I sped through and found myself entertained the entire time.

What I didn't like: This book's pacing was all over the place. It starts off pretty consistent and steady, but as you near the midway point and especially at the end, things just sort of take off and some really serious and complex topics are discussed in only a couple pages near the end. Maybe they weren't supposed to be the main focus of the story, but I think it did a bit of a disservice to the characters and their development. And speaking of development, I'd say I found the growth of Fiona in particular to be pretty lacking, and by the end of the book I didn't necessarily think she'd grown all that much. She definitely had some important realizations and discoveries about herself, but I would've liked to maybe see a bit more development. Lastly, I felt the relationship between Fiona and Sam was a bit abrupt at times and sort of threw me with its sort of whiplash changes.

Overall, this is a really fulfilling contemporary romance that I think would be a perfect book to relax poolside with this summer.

*I received a copy of Birds of California courtesy of the publisher in exchange for an honest review.*