Can't-Wait Wednesday: It Rides a Pale Horse by Andy Marino, Dark Room Etiquette by Robin Roe, & The Dark Between the Trees by Fiona Barnett 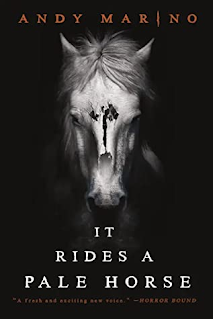 From Goodreads:
"From a new star in horror fiction comes a terrifying novel of obsession, greed, and the shocking actions we’ll take to protect those we love, all set in a small town filled with dark secrets.
The Larkin siblings are known around the small town of Wofford Falls. Both are artists, but Peter Larkin, Lark to his friends, is the hometown hero. The one who went to the big city and got famous, then came back and settled down. He’s the kind of guy who becomes fast friends with almost anyone. His sister Betsy on the other hand is more… eccentric. She keeps to herself.
When Lark goes to deliver one of his latest pieces to a fabulously rich buyer, it seems like a regular transaction. Even being met at the gate of the sprawling, secluded estate by an intimidating security guard seems normal. Until the guard plays him a live feed: Betsy being abducted in real time.
Lark is informed that she’s safe for now, but her well‑being is entirely in his hands. He's given a book. Do what the book says, and Betsy will go free.
It seems simple enough. But as Lark begins to read he realizes: the book might be demonic. Its writer may be unhinged. His sister's captors are almost certainly not what they seem. And his town and those within it are... changing.
And the only way out is through."
I'll be honest, I'm genuinely obsessed with this cover. It's probably one of my favorites now. But fortunately the book also sounds really spooky and awesome as well, so I can't wait to read it! I'll probably save my ARC til a little closer to October to read it, but I'm probably going to be staring at the cover daily until then anyway.
and... 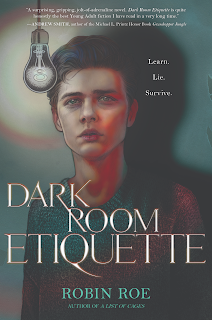 From Goodreads:
"Sixteen-year-old Sayers Wayte has everything—until he's kidnapped by a man who tells him the privileged life he's been living is based on a lie.
Trapped in a windowless room, without knowing why he's been taken or how long the man plans to keep him shut away, Sayers faces a terrifying new reality. To survive, he must forget the world he once knew, and play the part his abductor has created for him.
But as time passes, the line between fact and fiction starts to blur, and Sayers begins to wonder if he can escape . . . before he loses himself."
This sounds terrifying and a little weird and I'm super intrigued by it! I think it's YA, which only makes me more interested considering this premise seems pretty intense, so hopefully I'll get a chance to check it out!
and... 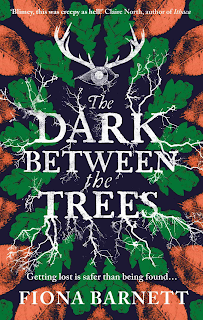 From Goodreads:
"An unforgettable, surrealist gothic folk-thriller with commercial crossover appeal from a brilliant new voice.
1643: A small group of Parliamentarian soldiers are ambushed in an isolated part of Northern England. Their only hope for survival is to flee into the nearby Moresby Wood... unwise though that may seem. For Moresby Wood is known to be an unnatural place, the realm of witchcraft and shadows, where the devil is said to go walking by moonlight...
Seventeen men enter the wood. Only two are ever seen again, and the stories they tell of what happened make no sense. Stories of shifting landscapes, of trees that appear and disappear at will... and of something else. Something dark. Something hungry.
Today, five women are headed into Moresby Wood to discover, once and for all, what happened to that unfortunate group of soldiers. Led by Dr Alice Christopher, an historian who has devoted her entire academic career to uncovering the secrets of Moresby Wood. Armed with metal detectors, GPS units, mobile phones and the most recent map of the area (which is nearly 50 years old), Dr Christopher's group enters the wood ready for anything. Or so they think."
I already love the sound of Moresby Wood and I'm just really loving the sound of this entire concept. I am very ready to see what there is to discover in this wood.
What do you think about these upcoming releases? What are your anticipated upcoming releases?
Posted by Jordan @ForeverLostinLiterature at 2:00 AM