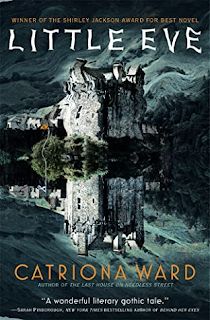 From Goodreads:
"'A great day is upon us. He is coming. The world will be washed away.'
On the wind-battered isle of Altnaharra, off the wildest coast of Scotland, a clan prepares to bring about the end of the world and its imminent rebirth.
The Adder is coming and one of their number will inherit its powers. They all want the honor, but young Eve is willing to do anything for the distinction.
A reckoning beyond Eve’s imagination begins when Chief Inspector Black arrives to investigate a brutal murder and their sacred ceremony goes terribly wrong.
And soon all the secrets of Altnaharra will be uncovered."
Catriona Ward has consistently written books that are really unique and a little weird, but also very captivating. I have an ARC of this that I can't wait to dive into.
and... 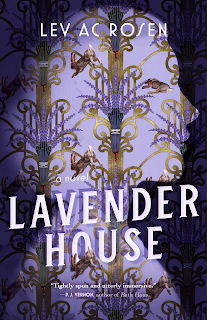 From Goodreads:
"Lavender House, 1952: the family seat of recently deceased matriarch Irene Lamontaine, head of the famous Lamontaine soap empire. Irene’s recipes for her signature scents are a well guarded secret—but it's not the only one behind these gates. This estate offers a unique freedom, where none of the residents or staff hide who they are. But to keep their secret, they've needed to keep others out. And now they're worried they're keeping a murderer in.
Irene’s widow hires Evander Mills to uncover the truth behind her mysterious death. Andy, recently fired from the San Francisco police after being caught in a raid on a gay bar, is happy to accept—his calendar is wide open. And his secret is the kind of secret the Lamontaines understand.
Andy had never imagined a world like Lavender House. He's seduced by the safety and freedom found behind its gates, where a queer family lives honestly and openly. But that honesty doesn't extend to everything, and he quickly finds himself a pawn in a family game of old money, subterfuge, and jealousy—and Irene’s death is only the beginning.
When your existence is a crime, everything you do is criminal, and the gates of Lavender House can’t lock out the real world forever. Running a soap empire can be a dirty business."
I caved and read an ARC of this back in July or August... but I really loved it and am now super excited for its release! I very highly recommend this one.
and... 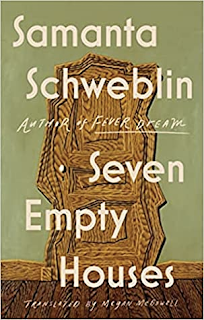 From Goodreads:
"A blazing new story collection that will make you feel like the house is collapsing in on you, from the 3 time International Booker Prize finalist, 'lead[ing] a vanguard of Latin American writers forging their own 21st-century canon.' -O, the Oprah magazine
The seven houses in these seven stories are empty. Some are devoid of love or life or furniture, of people or the truth or of memories. But in Samanta Schweblin's tense, visionary tales, something always creeps back in: a ghost, a fight, trespassers, a list of things to do before you die, a child's first encounter with a dark choice or the fallibility of parents.
This was the collection that established Samanta Schweblin at the forefront of a new generation of Latin American writers. And now in English it will push her cult status to new heights. Seven Empty Houses is an entrypoint into a fiercely original mind, and a slingshot into Schweblin's destablizing, exhilarating literary world.
In each story, the twists and turns will unnerve and surprise: Schweblin never takes the expected path and instead digs under the skin and reveals uncomfortable truths about our sense of home, of belonging, and of the fragility of our connections with others. This is a masterwork from one of our most brilliant writers."
I feel like the synopsis for this one is a little vague, but I'm really intrigued by the idea of different stories focusing on different empty houses and I assume the stories they hold within. It's classified under horror so I'm not sure whether to expect some weird stuff or something more literary?? Regardless, I'm excited!
What do you think about these upcoming releases? What are your anticipated upcoming releases?
Posted by Jordan @ForeverLostinLiterature at 2:00 AM