Can't-Wait Wednesday: Empire of Ice and Stone by Buddy Levy & The Light Pirate 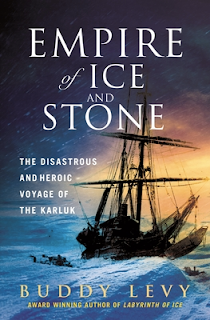 From Goodreads:
"The true, harrowing story of the ill-fated 1913 Canadian Arctic Expedition and the two men who came to define it.
In the summer of 1913, the wooden-hulled brigantine Karluk departed Canada for the Arctic Ocean. At the helm was Captain Bob Bartlett, considered the world’s greatest living ice navigator. The expedition’s visionary leader was a flamboyant impresario named Vilhjalmur Stefansson hungry for fame.
Just six weeks after the Karluk departed, giant ice floes closed in around her. As the ship became icebound, Stefansson disembarked with five companions and struck out on what he claimed was a 10-day caribou hunting trip. Most on board would never see him again.
Twenty-two men and an Inuit woman with two small daughters now stood on a mile-square ice floe, their ship and their original leader gone. Under Bartlett’s leadership they built make-shift shelters, surviving the freezing darkness of Polar night. Captain Bartlett now made a difficult and courageous decision. He would take one of the young Inuit hunters and attempt a 1000-mile journey to save the shipwrecked survivors. It was their only hope.
Set against the backdrop of the Titanic disaster and World War I, filled with heroism, tragedy, and scientific discovery, Buddy Levy's Empire of Ice and Stone tells the story of two men and two distinctively different brands of leadership: one selfless, one self-serving, and how they would forever be bound by one of the most audacious and disastrous expeditions in polar history, considered the last great voyage of The Heroic Age of Discovery."
I'm actually reading this right now and am loving it! It's so nice to be reading about another polar expedition, it almost feels like home, haha.
and... 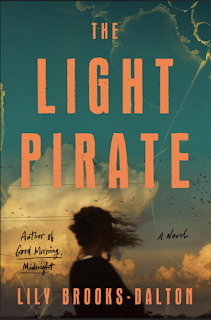 From Goodreads:
"Florida is slipping away. As devastating weather patterns and rising sea levels gradually wreak havoc on the state’s infrastructure, a powerful hurricane approaches a small town on the southeastern coast. Kirby Lowe, an electrical line worker; his pregnant wife, Frida; and their two sons, Flip and Lucas, prepare for the worst. When the boys go missing just before the hurricane hits, Kirby heads out into the high winds to search for them. Left alone, Frida goes into premature labor and gives birth to an unusual child, Wanda, whom she names after the catastrophic storm that ushers her into a society closer to collapse than ever before.
As Florida continues to unravel, Wanda grows. Moving from childhood to adulthood, adapting not only to the changing landscape, but also to the people who stayed behind in a place abandoned by civilization, Wanda loses family, gains community, and ultimately, seeks adventure, love, and purpose in a place remade by nature.
Told in four parts—power, water, light, and time—The Light Pirate mirrors the rhythms of the elements and the sometimes quick, sometimes slow dissolution of the world as we know it. It is a meditation on the changes we would rather not see, the future we would rather not greet, and a call back to the beauty and violence of an untamable wilderness."
I have an ARC of this I've been meaning to read for a while now and I hope to get to it soon. I'm always intrigued by these near-future novels and curious to see how they execute different ideas.
What do you think about these upcoming releases? What are your anticipated upcoming releases?
Posted by Jordan @ForeverLostinLiterature at 2:00 AM