Can't-Wait Wednesday: A History of Fear by Luke Dumas & The Tatami Galaxy by Tomihiko Morimi 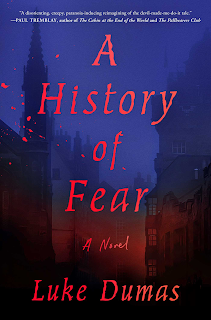 From Goodreads:
"Grayson Hale, the most infamous murderer in Scotland, is better known by a different name: the Devil’s Advocate. The twenty-five-year-old American grad student rose to instant notoriety when he confessed to the slaughter of his classmate Liam Stewart, claiming the Devil made him do it.
When Hale is found hanged in his prison cell, officers uncover a handwritten manuscript that promises to answer the question that’s haunted the nation for years: was Hale a lunatic, or had he been telling the truth all along?
Unnervingly, Hale doesn’t fit the bill of a killer. The first-person narrative that centers this novel reveals an acerbic young atheist, newly enrolled at the University of Edinburgh to carry on the legacy of his recently deceased father. In need of cash, he takes a job ghostwriting a mysterious book for a dark stranger, but has misgivings when the project begins to reawaken his satanophobia, a rare condition that causes him to live in terror that the Devil is after him. As he struggles to disentangle fact from fear, Grayson’s world is turned upside-down after events force him to confront his growing suspicion that he’s working for the one he has feared all this time—and that the book is only the beginning of their partnership.​​
A History of Fear is a propulsive foray into the darkness of the human psyche, marrying dread-inducing atmosphere and heart-palpitating storytelling."
I feel like I've been seeing this book for as an anticipated release for months and months by now, and it's only made me want to read it more each time I see it!
and... 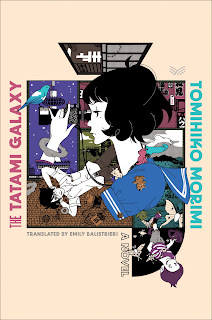 From Goodreads:
"An unfulfilled college student hurtles through four parallel realities to explore the what-might've-been and the what-should-never-be in this Groundhog Day meets The Midnight Library-esque novel from one of Japan's most popular authors.
Our protagonist, an unnamed junior at a prestigious university in Kyoto, is on the verge of dropping out. After rebelling against the dictatorial jock president of the film club, he and his worst and only friend, the diabolical creep Ozu, are personas non grata on campus. For two years, our protagonist has made all the wrong decisions, and now he's about to make another mistake. He and Ozu are preparing for revenge--a fireworks attack at the film club's welcoming party for new members. Then, a chance encounter with a self-proclaimed god sets the confused and distraught young man on a new course. Destiny will bring him together with Akashi, the blunt but charming sophomore he has a crush on--if he's brave enough to make a move. Yet our protagonist cannot get beyond his profound disillusionment and the moment is lost. But what if there's a universe where he did join the club of his dreams, ditched Ozu for good, and was confident enough to get the girl? A realm of possibility opens up for our protagonist as time rewinds, and from the four-and-a-half-mat tatami floor of his dorm room, he is plunged into a series of adventures that will take him to four parallel universes. In each universe, he is given the opportunity to start over as a freshman, in search of a rose-colored campus life."
How fun does this premise sound? I think this would make for a perfect lighter speculative fiction read!
What do you think about these upcoming releases? What are your anticipated upcoming releases?
Posted by Jordan @ForeverLostinLiterature at 2:00 AM