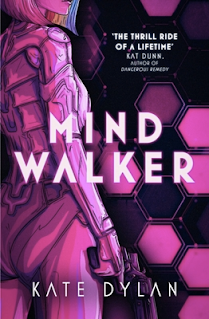 Mindwalker by Kate Dylan
Hodder & Stoughton
Publication Date: September 1st, 2022
Hardcover. 320 pages.
About Mindwalker:
"Eighteen-year-old Sil Sarrah is determined to die a legend. But with only twelve months left before the supercomputer grafted to her brain kills her, Sil's time is quickly running out.
In the ten years she's been rescuing field agents for the Syntex corporation - by commandeering their minds from afar and leading them to safety - Sil hasn't lost a single life. And she's not about to start now.
But when a critical mission goes south, Sil is forced to flee the very company she once called home.
Desperate to prove she's no traitor, Sil infiltrates the Analog Army, an activist faction working to bring Syntex down. Her plan: to win back her employer's trust by destroying the group from within. Instead, she and the Army's reckless leader, Ryder, uncover a horrifying truth that threatens to undo all the good she's ever done.
With her tech rapidly degrading and her new ally keeping dangerous secrets of his own, Sil must find a way to stop Syntex in order to save her friends, her reputation - and maybe even herself."

Mindwalker is fast-paced, thrilling sci-fi read that ended up majorly exceeding all my expectations. In all honestly, I was a little hesitant to read this because I kept seeing it described by others and the author herself as "a Marvel movie re-imagined as a YA novel," and, well... I'm not a Marvel fan, and YA SFF has been a trickier category for me lately. Despite those hesitations, I decided to dive in anyway because the premise sounded really fun, and I was delighted to find that this was an incredibly entertaining read that I devoured and was so glad to be wrong about.

What I liked: If you, like me, tend to struggle with speculative YA lately, you might be happy to hear that I didn't really have any of the issues that I tend to have with YA in Mindwalker (other than one minor one, which I'll discuss int he next section). This book throws you right into the action of what Mindwalkers and it was executed so well. I didn't feel too lost or confused, but rather I found that Kate Dylan always fed us just enough information to follow along, and if there was something I dnd't understand I found I didn't mind because the story itself was too riveting to care! Our protagonist Sil does not mess around and takes her work very seriously, and I really appreciated seeing her in action being the badass that she clearly is. This book is full of twists and turns and the plotting felt really well done overall. This isn't a very big book, which worried me after seeing the premise, but I think Dylan did an amazing job crafting this story in a way to where I felt connected to the characters, sucked into the plot, and enjoying the entire ride without it feeling too rushed.

What I didn't like: I really don't have many gripes with this book, and the issues I do have are pretty minor. The first would be the love interest that occurs, which felt overall a little unnecessary. It was fun and added a little bit of depth to the story, but for 320 pages it was a little rushed. I also found the plot itself somewhat predictable in overall themes and character discoveries and arcs, but this predictability didn't majorly impact my experience since the rest of the story was so unique and exciting. I wouldn't call this the most groundbreaking book or that is has the most compelling characters, but it absolutely serves its roles as a well-written book with a good story, interesting sci-fi tech and elements, and an urgency that kept me turning the pages.