Can't-Wait Wednesday: The Curse of the Marquis de Sade by Joel Warner, Boy in a White Room by Karl Olsberg, & The Island by Natasha Preston 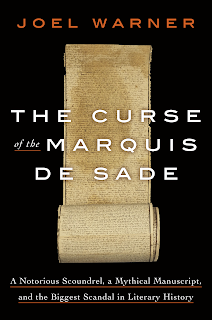 From Goodreads:
"Described as both “one of the most important novels ever written” and “the gospel of evil,” 120 Days of Sodom was written by the Marquis de Sade, a notorious eighteenth-century aristocrat who waged a campaign of mayhem and debauchery across France, evaded execution, and inspired the word “sadism,” which came to mean receiving pleasure from pain. Despite all his crimes, Sade considered this work to be his greatest transgression.

The original manuscript of 120 Days of Sodom, a tiny scroll penned in the bowels of the Bastille in Paris, would embark on a centuries-spanning odyssey across Europe, passing from nineteenth-century banned book collectors to pioneering sex researchers to avant-garde artists before being hidden away from Nazi book burnings. In 2014, the world heralded its return to France when the scroll was purchased for millions by Gérard Lhéritier, the self-made son of a plumber who had used his savvy business skills to upend France’s renowned rare-book market. But the sale opened the door to vendettas by the government, feuds among antiquarian booksellers, manuscript sales derailed by sabotage, a record-breaking lottery jackpot, and allegations of a decade-long billion-euro con, the specifics of which, if true, would make the scroll part of France’s largest-ever Ponzi scheme.

Told with gripping reporting and flush with deceit and scandal, The Curse of the Marquis de Sade weaves together the sweeping odyssey of 120 Days of Sodom and the spectacular rise and fall of Lhéritier, once the “king of manuscripts” and now known to many as the Bernie Madoff of France. At its center is an urgent question for all those who cherish the written word: As the age of handwriting comes to an end, what do we owe the original texts left behind?"

I love some history and I especially love when it's something to do with books or manuscripts or anything literary. This sounds like a fascinating read. 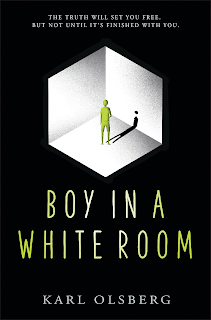 From Goodreads:
"A fifteen-year-old boy wakes to find himself locked in a white, cube-shaped room. No windows. No doors. Total silence. He has no memories. No clue how he got there. No idea who he is.

A computer-generated voice named Alice responds to his questions. Through her, he is able to access the internet. As the boy uncovers snippets of his story--an attempted abduction, a critial injury, a murder -- it becomes clearer. But when some of the pieces don't fit, how can he tell what's real and what's not? Who can he trust? And who is he really?"

This was originally published in Germany a few years back and it's now being published in English here in the US. I'm really curious about this interesting premise, especially since we don't get all that much information about it. 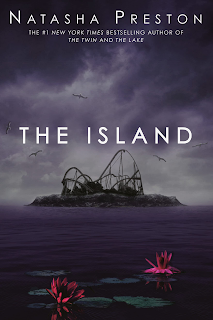 From Goodreads:
"They said goodbye to their friends and family for the weekend. They weren’t counting on forever.

Jagged Island: a private amusement park for the very rich—or the very influential. Liam, James, Will, Ava, Harper, and Paisley—social media influencers with millions of followers—have been invited for an exclusive weekend before the park opens. They’ll make posts and videos for their channels and report every second of their VIP treatment.

When the teens arrive, they're stunned: the resort is even better than they’d imagined. Their hotel rooms are unreal, the park’s themed rides are incredible, and the island is hauntingly beautiful. They’re given a jam-packed itinerary for the weekend.

But soon they'll discover that something's missing from their schedule: getting off the island alive."

I'm a huge sucker for any type of "locked room" premise like this so I'm very excited about this one.
Posted by Jordan @ForeverLostinLiterature at 2:00 AM