Can't-Wait Wednesday: She is a Haunting by Trang Thanh Tran, The Writing Retreat by Julia Bartz, & The Porcelain Moon by Janie Chang 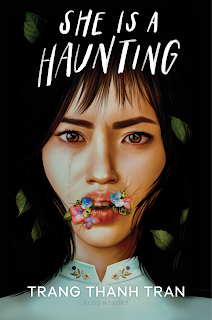 From Goodreads:
"A house with a terrifying appetite haunts a broken family in this atmospheric horror, perfect for fans of Mexican Gothic.

When Jade Nguyen arrives in Vietnam for a visit with her estranged father, she has one goal: survive five weeks pretending to be a happy family in the French colonial house Ba is restoring. She’s always lied to fit in, so if she’s straight enough, Vietnamese enough, American enough, she can get out with the college money he promised.

But the house has other plans. Night after night, Jade wakes up paralyzed. The walls exude a thrumming sound, while bugs leave their legs and feelers in places they don’t belong. She finds curious traces of her ancestors in the gardens they once tended. And at night Jade can’t ignore the ghost of the beautiful bride who leaves her cryptic warnings: Don’t eat.

Neither Ba nor her sweet sister Lily believe that there is anything strange happening. With help from a delinquent girl, Jade will prove this house—the home her family has always wanted—will not rest until it destroys them. Maybe, this time, she can keep her family together. As she roots out the house’s rot, she must also face the truth of who she is and who she must become to save them all."

I love a house that's alive, and the comparison to Mexican Gothic has me knowing I shouldn't get my hopes up.. but the hopes are already up. Really excited for the Vietnam setting as well! I think this cover is incredible as well. 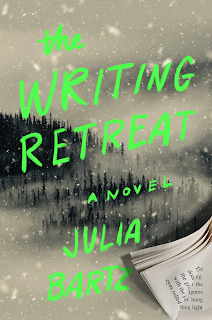 From Goodreads:
"The Plot meets Please Join Us in this psychological suspense debut about a young author at an exclusive writer’s retreat that descends into a nightmare.

Alex has all but given up on her dreams of becoming a published author when she receives a once-in-a-lifetime opportunity: attend an exclusive, month-long writing retreat at the estate of feminist horror writer Roza Vallo. Even the knowledge that Wren, her former best friend and current rival, is attending doesn’t dampen her excitement.

But when the attendees arrive, Roza drops a bombshell—they must all complete an entire novel from scratch during the next month, and the author of the best one will receive a life-changing seven-figure publishing deal. Determined to win this seemingly impossible contest, Alex buckles down and tries to ignore the strange happenings at the estate, including Roza’s erratic behavior, Wren’s cruel mind games, and the alleged haunting of the mansion itself. But when one of the writers vanishes during a snowstorm, Alex realizes that something very sinister is afoot. With the clock running out, she’s desperate to discover the truth and save herself."

I'm such a sucker for a locked room mystery at any level, and this sounds like it will be quite a ride. 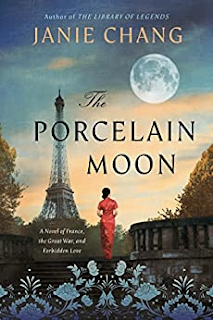 From Goodreads:
"France, 1918. In the final days of the First World War, a young Chinese woman, Pauline Deng, runs away from her uncle’s home in Paris to evade a marriage being arranged for her in Shanghai. To prevent the union, she needs the help of her cousin Theo, who is working as a translator for the Chinese Labour Corps in the French countryside. In the town of Noyelles-sur-Mer, Camille Roussel is planning her escape from an abusive marriage, and to end a love affair that can no longer continue. When Camille offers Pauline a room for her stay, the two women become friends. But it’s not long before Pauline uncovers a perilous secret that Camille has been hiding from her. As their dangerous situation escalates, the two women are forced to make a terrible decision that will bind them together for the rest of their lives.

Set against the little-known history of the 140,000 Chinese workers brought to Europe as non-combatant labor during WWI, The Porcelain Moon is a tale of forbidden love, identity and belonging, and what we are willing to risk for freedom."

I've really enjoyed Janie Chang's historical fiction in the past and I'm so glad to see a new release from her coming up. I'm really curious about the premise for The Porcelain Moon.