On the Beach by Nevil Shute Book Review 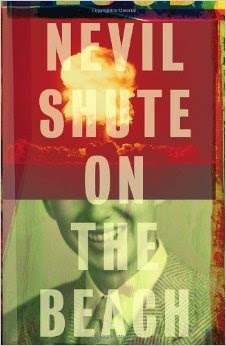 First,  I am aware that I'm about 50 years late in reading and reviewing this book, but I just picked it up Saturday and finished it the next day, and it was oddly extremely interesting and I really think I liked it.

This is one of those books that's not so much about the story and its plot as it is an analysis and  curious look at how people handle an impending and inevitable apocalypse. After a severe World War III with vast amounts of nuclear warfare, the entire world is basically destroyed, and all that is left is a portion of southern Australia. The inhabitants of this area are aware that the cloud of radiation will reach them in a matter of months, - or sooner - and are basically just sitting around living their lives, waiting for their death.

We know how this book ends just by reading the back cover. What's interesting is how these people handle the information. Some embrace it and are able to freely talk about it, while others are in strong denial and refuse to acknowledge their impending doom.

The book focuses on the four main characters of Peter Holmes, Mary Holmes, Dwight Towers, and Moira Davidson. Peter and Mary are a lovely young couple with a baby, Jennifer, who attempt to go on leading their regular lives. Mary, for one, is extremely passive, and prefers to live in denial about the radiation. She is always asking Peter if their is any way to avoid the radiation, and doesn't seem to grasp the fact that everyone is going to get sick no matter what. Peter is much more practical, and realizes that they are likely going to want to take some pills that will allow them to die without suffering too much from the radiation. Mary, however, finds this morbid and horrifying - understandably so.

Dwight Towers is a commander of the last American submarine and has basically attached his vessel to the Australian Navy. Dwight is a very engaging character, and I really enjoyed his personality. He's an extremely logical, astute man, but prefers to pretend that the entire world has not been destroyed, and that his wife and daughter in American are still alive and anxiously awaiting his return. It's both heartbreaking and endearing, and immensely interesting. Moira Anderson, whom Dwight meets through Peter and Mary, eventually shares this same view, and pretends that Dwight's family is also still alive. She is a compulsive brandy drinker, and spends a majority of her time doing just that. Moira, however, unlike Mary, realizes that her life is being cut extremely short, and is depressed and upset at the realization that she will never have the opportunity to get married or do half of the things she has ever wanted to.

One of this "high action" moments of the novel occurs when a Morse Code signal is heard coming from Seattle, a place believed to be completely destroyed and devoid of all people, which prompts a very dangerous submarine expedition to find out if there is actually any life there. Again, the ways in which people respond to the danger and reality of their predicament is what really carries the story.

What I found most fascinating about this novel was just how different each person handled the situation. I understand that this is all fiction, but I can easily see many people doing these things if this were a real situation. It really makes me think and wonder if people would actually act in such a pleasant, calm manner when they know that their world is ending, or if they would become violent, crazy, and rash, as many modern apocalyptic movies and books portray them?

I'm giving this book four stars because of how thought-provoking and fascination I found it. I would highly recommend this book if you are looking for something different. For the content of the novel, it's a surprisingly pleasant book with amusing characters, but is also subtly marred with despair, grief, and overarching atmosphere of resignation.

Posted by Jordan @ForeverLostinLiterature at 9:26 AM