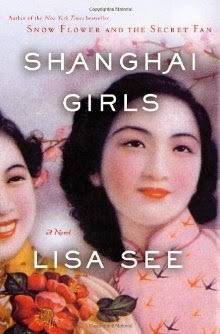 
"May and I are sisters. We'll always fight, but we'll always make up as well. That's what sisters do: we argue, we point out each other's frailties, mistakes, and bad judgment, we flash the insecurities we've had since childhood, and then we come back together. Until the next time. ”

To me, this quote perfectly sums up the story of Shanghai Girls, which heavily focuses on the relationship between two sisters, Pearl and May, and their struggle to find and create their own lives. This quote also, in my opinion, perfectly captures the bond formed between any siblings.

I am fascinated by cultures other than my own. It's incredibly interesting to me to learn the traditions of other countries and peoples, as everyone has their own unique beliefs of life and methods of living. I have a particularly deep interest in Asian literature, which is largely what led me to read Shanghai Girls. About a year ago I finally read Memoirs of a Geisha by Arthur Golden, and I loved it with a fiery passion - and no, I'm not exaggerating. I loved it so much that I was able to easily convince my mom to read it, and she loved it as well. Since then, I have been trying to find a book that could even come close to being as good as that. Well, Shanghai Girls has come the closest to doing just that.

Lisa See does a truly marvelous job of capturing the struggles and plight of sisters Pearl and May. The girls begin their lives living in Shanghai, posing as models for a well-known painter, and are stunned when they discover that they are to be married off to two unknown men because of their father's large debts. Thus begins their dangerous journey throughout Shanghai as they try to avoid moving to the Unite States, as they struggle with moving through the immigration process to enter San Francisco, and finally as they try to develop of life for themselves in a new country. See writes with a purpose. She explains current events and descriptions of places thoroughly. No words are wasted with unnecessary information, and I really liked that about her writing style.

I loved the contrasting personalities of Pearl and May. They are incredibly different, yet both are able to use their unique personalities to find their own inner strength to keep fighting for a better life. Throughout the story, each has to make numerous great sacrifices throughout for the good of both each other and their families. I loved how See made the girls so realistic; they were certainly not perfect. They had flaws; they were at times selfish, greedy, and liars. But they also had an underlying sense of loyalty to one another that, no matter what happened, could not be removed.

The cast of supporting characters that surrounded Pearl and May were also very skillfully portrayed. See was able to create development in each and every one of her characters, allowing for extremely well-rounded and realistic characters. For instance, we can see Pearl's husband transition from someone who barely speaks and hardly acknowledges his wife, appearing to be cold and uninterested, to someone who is, at heart, a kind man who has faced a harsh life, and who would do anything to support his family. We see people who were once strong become completely broken down from the hatred and harshness that is thrust against them.

I also thought that the author did a wonderful job of depicting China and its culture. I can sense that she did very thorough research and spent a lot of time making sure she was able to accurately portray China and her characters. She also did remarkably well at depicting the discrimination and hatred that those in the United States felt towards the Chinese and other ethnic groups. As I grew attached to the characters, I felt as if I was being discriminated against as well; I felt like I could understand what they were experiencing, even though I know that I never have and I probably never will experience anything even remotely close to what they endure.

This book is not lighthearted. It is not a happy read, and there are not a lot of positive things that happen to the families portrayed. That being said, it is still wonderful; some of the best books are the saddest ones. It is heartbreakingly beautiful, and has many bittersweet moments throughout.

One of the biggest and only issues I had was that how the book just sort of... ended. I was at 90% on my Kindle, and I could tell we were reaching the end, but there were still issues that had to be dealt with. I turned the page, expecting to find a new chapter - instead, acknowledgments. It was over. I was confused. I didn't realize that Lee is continuing the story in a second novel, and I had absolutely no idea that the book would just end with so many loose ends. Because of this, I am moving the rating to 4.5 stars. I know it’s not much, but I simply was not prepared for the ending, and I think it could have been executed in a much better manner.


Overall, I say check it out! From reading this book, I feel that I have a better understanding of the struggles that many people faced during those hard times in America, and I realized many important things about the strength and importance of familial bonds – especially between siblings.
Posted by Jordan @ForeverLostinLiterature at 9:57 AM