Sea of Shadows by Kelley Armstrong 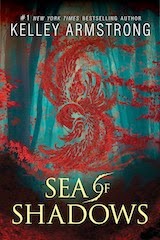 Sea of Shadows was a book that I stumbled onto on BookOutlet when they were having a huge sale and it was only $1.99. It seemed interesting, it was cheap, I was on a book-buying spree, and how can you say no to $1.99?

I must be honest, I don’t quite understand why this book has so many low reviews. I can understand a few, and even not having really high ratings, but not necessarily the really low ones. Many people seem to believe it was boring, and while I guess I can understand their view, I politely disagree. It was very engaging, and full of exciting action, folklore, and entertaining characters.

In brief, Sea of Shadows follows twin sisters Moria and Ashyn, the Keeper and Seeker, respectively, of a town called Edgewood. When their entire village is destroyed, they must venture on a journey to find out what has gone wrong.

The characters were very appealing, however I do think that each character needed to have a more defined and unique voice. Twin sisters Ashyn and Moria were lovely, entertaining characters, but not too different. Their personalities are described as being extreme opposites, Ashyn being shy and gentle, and Moria being much tougher and more outgoing. This is evident at times, but overall I think they had similar voices that sometimes made for little distinction between the alternating chapter viewpoints. However, I could also see their similar voices as being a method of showing how close both girls are; since they are Seeker and Keeper of Edgewood and twin sisters that have grown up very close together, it only makes sense that they might share similar voices or qualities. Supporting characters Ronan and Gavril were also quite a delight, but again, shared many similar traits, and to be quite honest, I’m not sure if I can even remember who accompanied each girl on their journey. Entertaining, but not overly memorable. I’m getting a wee bit tired of every single boy/girl pairing in a book ending up with some romantic setting.

Kelley Armstrong definitely knows how to write. However, I do think I expected more. I’ve heard people rave and rave about Kelley Armstrong, but I had never had a chance to read anything until now. I thought the book was great, but not quite up to par with all the praise I’ve been hearing for Armstrong. I was a bit disappointed that the ending was a bit of a cliffhanger, since I wasn’t necessarily planning on reading the rest of the series, but now I feel somewhat obligated, and I am interested to find out what will befall these characters.

Overall, it’s not the most memorable story. However, I still thought it was a very enjoyable read, and definitely worth a shot for someone that’s just looking for a good book to read. Because of this, I am giving Sea of Shadows 3 ½ stars.

Sea of Shadows comes out on Wednesday, March 3rd!

Posted by Jordan @ForeverLostinLiterature at 3:54 PM