The Eyre Affair by Jasper Fforde 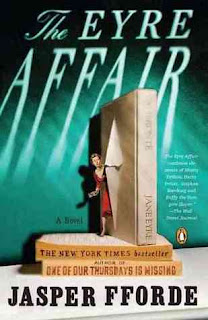 This was one of the most clever books I have read in quite a while. I lost count of the number of chuckles and laughs that escaped me while reading this book, all due to the charm and clever wit of Fforde's writing and imagination.

The Eyre Affair takes place in the 1980s, but in an alternate world from our own - a place where time travel is considered normal. In this world lives Thursday Next, a Special Operative, LiteraTec who regularly investigates issues revolving around stolen manuscripts and other literary dilemmas and crimes. One day, however, a legendary criminal by the name of Acheron steals Jane Eyre herself from Jane Eyre, and Thursday must find her and save her in order to save the original manuscript and story - which she does by entering into the novel itself.

The Eyre Affair is the exact definition of an unpredictable novel. We're thrust into this alternate 1980s world that is entirely the same, yet entirely different from our regular world. The best part: it's completely centered around literature. I love the added touches that litter the  normal and create such an imaginative world. For example, there are 'Baconians' who go around like religious followers and try to convince people that it was actually Sir France Bacon who penned all of William Shakespeare's works, not Shakespeare himself. I also absolutely loved how dodos have been cloned, brought back from extinction, and are now some of the most popular pets - they seem so adorable. I loved these little details, as they really brought the entire world to life in a very whimsy and exciting way.

On the negative side, sometimes it seemed like there was just too much going on, and I felt a bit... confused. Now, confusion was a rather common feeling for me in this book, as it was a smidge hard to pick up the lingo and figure out who was who and what meant what, but most of the time it went fairly smoothly. It was just too convoluted overall - the Acheron Hades storyline (the main one, which eventually includes the whole Jane Eyre manuscript debacle), her romance (?) with Landen and (kinda?) Bowden, her aunt and uncle's kidnapping (related to Hades, but still different), her father, her career, etc. etc. I just felt lost in this wide world of wit and imagination; all I needed was a nice little guidebook, and it would have been perfect.

Thursday Next is someone who on the surface seems very organized and thoughtful, but she's actually rather impulsive, and also very quick-witted. She's sly, clever, and knows her literature (I mean, she is a LiteraTec, after all). I enjoyed following her on her adventures and learning more about her career, family life, and her overall interact with this crazy world. The Eyre Affair is littered with a large supporting cast that add so much excitement to this book; even the names of these characters was enough to make me happy - Victor Analogy, Braxton Hicks, Jack Schitt. I don't want to go into too many details about these characters or any other elements of the story, however, because while they may not be direct spoilers, I feel like a big part of the enjoyment of The Eyre Affair is in the sheer unpredictability and discovery of everything.

However, while I enjoyed Thursday Next as a character, I never felt like I really got to know her and who she really is as a person. There seemed to be this thin wall placed between the reader and Thursday, which hid some of her personality and prevented me from really connecting with her or understanding her emotions. In fact, she was almost somewhat bland. She had good humor and made quirky jokes with her companions, but there wasn't much other depth. Her backstory had depth, such as her time spent in Crimea and her history with LiteraTec and, but her character lacked depth.

Overall, The Eyre Affair is receiving a nice four stars, because despite it's incredibly fascinating world and enjoyable read, there were issues that could have used improvement, such as with the characters and mash-up of plotlines. I would definitely recommend to any who loves wit, charm, literature and literary-inspired things, or simply anyone who wants an enjoyable read!

You might also like:
Mr. Penumbra's 24-Hour Bookstore by Robin Sloan
Kafka on the Shore by Haruki Murakami

Get more reviews in your inbox and subscribe to Forever Lost in Literature!
Posted by Jordan @ForeverLostinLiterature at 8:22 AM