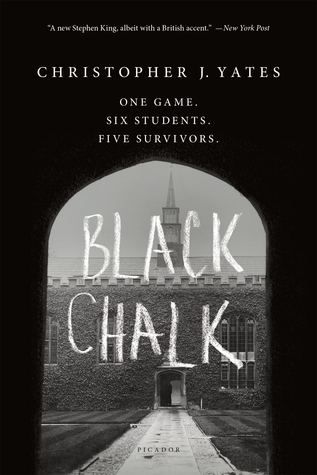 I am a major sucker for books like Black Chalk, and by that I mean books that center around a group of friends at a college or boarding school that become involved in some secret club or game or something oddly unnerving and mysterious - something that just expels mystery and darkness and secrets, whether in an overtly obvious  or hidden manner. Black Chalk did this perfectly.

I'd first like to say that The Secret History by Donna Tartt is one of my absolute favorite books, so when I read the back cover summary for Black Chalk and found a distinct-yet-subtle The Secret History vibe, I became extremely excited to read it. Of course, this made me nervous that it would not live up to my expectations, but thankfully, it exceeded them.

In Black Chalk, six Oxford University college students decide to create a game for the them to play. This is not just any game, however, for this game has high stakes and high money attached to it; it is, quite simply, a game of consequences. These consequences, of course, range from the mild to the extreme and are meant to be more psychologically difficult than physically challenging or any other manner.

Black Chalk is written in alternating viewpoints and is divided up quite intricately; some sections are written in a form of third-person narration, while others are first person, though I won't say who the first person narrator is because this is a rather vital part of the book. Because of this, actually, I'm going to try to keep key plot points and summaries of Black Chalk to a minimum, because honestly, just about every aspect of this book is important to the story, and half of the entertainment and thrill value is in reading along and discovering the various secrets and hidden meanings delicately placed throughout.

That being said, Yates has a very distinct writing style. At times, it is elegant and free-flowing with breathtaking sentences and deep musings. Other times, it is abrupt and sharp in order to match the current tone or setting of the story. However, these two styles are written in such a way that everything flows in a smooth and effortless manner as a result. There are almost constant twists and turns throughout the story that definitely kept me on my toes and increased my enjoyment immensely simply because most of them were sincerely surprising and unexpected. There were many times where one little sentence would be uttered, or one thing would be explained and I would have a mental (or verbal) "ah-ha" moment and sit back, smile slightly to myself, and shake my head as I tried to work out this complex story.

Yates' characters are all wonderfully vibrant and quirky, and each one harbors deeper personalities than they let on. We have Chad, an American student studying abroad; Jolyon, a quick-witted and charismatic young man; Jack, a humorous-to-the-point-of-offense friend; Mark, a perpetually sleepy friend; Dee, an eccentric young woman that vows to commit suicide once she has written her five hundredth poem; and lastly, Emilia, the studious and most innocent of the lot who attempts to keep everyone in line. Together, this cast of characters makes for hilarious and witty dialogue, of which Yates give us plenty of material. If it weren't for how charming and sophisticated the dialogue is between these friends, I might have gotten annoyed by the sheer quantity of it at various points in the novels. However, Yates' sharp tongue - or pen, rather - keeps it lively and a thrill to read. These characters also provide an abundance of emotion and drama as a result of such strong-willed characters.

Overall, I am giving Black Chalk five stars and will be adding it to both my favorites shelf on Goodreads and my 'Top Books of 2015' post. I found Black Chalk extremely hard to put down, and it allowed me to delve back into those feelings I experienced while reading The Secret History and A Separate Peace. I really cannot recommend it enough.


You might also like:
Slade House by David Mitchell
Bradstreet Gate by Robin Kirman
The Goldfinch by Donna Tartt

Posted by Jordan @ForeverLostinLiterature at 9:58 PM