More than Monsters by J.M. Riou 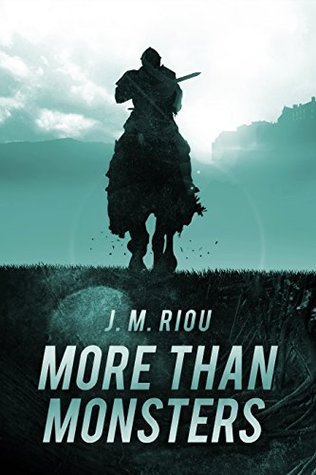 At only 123 pages, More than Monsters is a short novella that begins a gritty fantasy series in the flintlock fantasy genre, also often described as "muskets and magic" fantasy. More than Monsters is set in the 17th century ad centers on a young woman named Cora who is sent by the baron to join a group of sicarian men to go scouting for his stolen treasure. Besides dealing with potentially dangerous monsters, Cora must deal with a strong, dangerous company of men who are just as dangerous - if not more - than the monsters they must fight on their journey. The cause of the entire scouting expedition, however, ends up being quite a disappointment to Cora - and me as well - and adds an entirely new element to the political and male-oriented issues within this world. I was captivated by this overarching theme off male power and dominance and how she attempts to deal with and work around it.

Riou has created a gritty world full of dark, shady characters that tend to create danger unease at every corner. The characters were each made with their own unique touch, and I felt that Riou was very precise in his creation of varying and obvious personality differences among the sicarians, who could have otherwise easily fallen into appearing too similar to one another. Orthane, for instance, is the worst of the crew, constantly threatening and taunting Cora while also engaging in odd, somewhat psychotic activities involving healing potions. I liked this added element, which made Orthane a much more well-developed three-dimensional character and brought him to life in unexpected ways. He also does this with other members of the company, such as another sicarian known as Menton, who I will leave you to discover for yourself.  The monsters described within the story are mainly orcs, though there are also plenty of ogre variations to be found as well.

Cora is also a well-developed and entertaining character, and I found myself very engaged in discovering how she handled every dangerous and unexpected task presented to her. From the start of her journey, Cora realizes that she will be dealing with an unruly band of men and knows that she will have to take extra precautions to protect herself from both them and the monsters they attempt to seek. Throughout the events of this story, Cora more than proves herself as a powerful, capable woman who refuses to back down from a fight.

The most prominent aspect of Riou's writing is his deft skill at writing action sequences. Each battle was extremely fleshed out, with no detail or swipe of a weapon left unsaid. Riou's talent for clear, engaging writing is evident most strongly within these battles that perfectly describe the actions, movements, and emotions experienced throughout. Personally, I am not overly fond of action or fighting sequences, not because of gore or violence, but just as a matter of preference, so I did struggle a bit to make it through some of the longer episodes. However, if you do enjoy that sort of event, you will certainly appreciate the obvious knowledge and skill that Riou has regarding combat.

Another area of More than Monsters that I appreciated was his mixture of time period and magic. There is not too much of either element; instead, there is a perfect mixture of magical elements, such as the healing potions used, with the historical setting of the frontier.

Overall, I am giving More than Monsters four stars, because although not every aspect was of my preference, the writing was very skilled and the story, setting, and themes created were very high quality and well-developed and I can easily see this story and world being continued.

You might also like:
A Vanishing Glow by Alexis Radcliff
Of Metal and Wishes by Sarah Fine
Posted by Jordan @ForeverLostinLiterature at 10:36 AM