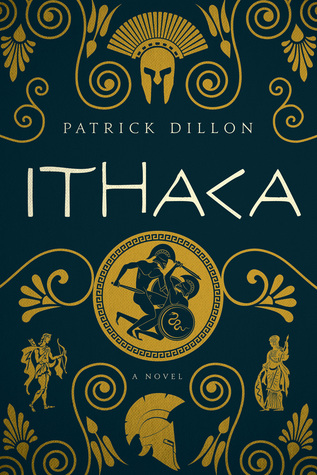 Ithaca by Patrick Dillon. Pegasus Books, 2016. Hardcover. 257 pages.
(I am absolutely in love with this cover design - it's stunning)


*I received a print copy of Ithaca by Patrick Dillon courtesy of Pegasus Books in exchange for an honest review.*

I love learning about Ancient Greek and Roman societies (I am a classics major, after all - it would be weird if I didn't enjoy that), which thus makes me extremely excited whenever I happen across a book that uses an Ancient Greek or Roman setting, storyline, myth, or culture. So when I saw Ithaca, an Odyssey-based story focusing on Odysseus' son, Telemachus, I knew that I had to immediately pick this one up. After reading it, I would say this is a great introductory novel to The Odyssey and the world of Ancient Greece, albeit not necessarily an overly in-depth or reinvented interpretation.

Ithaca is an Odyssey retelling in which Telemachus and his mother, Penelope, have been living in Ithaca for the sixteen years since his father first went away to fight at Troy. Telemachus has grown up those sixteen years never having met his father, and the court where he resides is now overflowing with suitors attempting to take Odysseus' place as Penelope's husband, despite her stubborn refusal to accept Odyesseus' death. As a result, Telemachus decides to embark upon on his own journey to find out whether his father is dead or if he is actually still alive.

I really liked the concept of this story; the idea of following Telemachus' perspective of the time in which his father is missing is incredibly intriguing, and I was eager to see how Dillon would handle this story line. To be honest, though, Telemachus didn't see much action, and I was almost disappointed by how uneventful his 'journey' ended up being. However, I think is partly because I found this book to me much more of a character and theme-driven story than one fueled by plot, which would account for the lack of adventuring. On the character-driven side, this novel certainly excelled. I liked that Telemachus was portrayed not as the tough, brutal boy you would expect as a result of the environment of his upbringing, but as a somewhat softer boy that is fiercely protective of his mother, but yet still does not know how to fight - likely a direct result of Odysseus' absence. He did not have the opportunity gain the same experiences or skills that a similar young boy at that time would have because he did not have any singular male influence to learn from or even look up to (all of the suitors are rather deplorable human beings). As a reader, we get to see Telemachus undergo a wide array of emotions and opinions, from yearning for his father's presence and firmly believing he is alive, to doubting his being alive and great reputation, along with everything in between.

Along with Telemachus, there is also a sizable portion - about one-third of the story - in which Odysseus recounts his experiences since leaving Troy and attempting to head home, a total of about ten years. This portion was a bit odd to me; I understood why it was placed in the story, but it didn't quite feel necessary. If you are unfamiliar with the actual story of The Odyssey, then this portion is quite frankly a perfectly succinct and understandable summary of the story, and also provided a nice refresher.

The rest of the cast of characters - Penelope, Nestor, Menelaus, Helen, etc. - were all quite wonderfully reimagined, and I felt a sense of excitement whenever a familiar face from the myth was introduced and I was able to see Dillon's interpretation of them. One tiny issue I had was with the character Polycaste, daughter of Nestor, whom Telemachus meets when he travels to find his father. While I enjoyed her character's strength, her dialogue seemed entirely out of place for this story and time period, and I actually found it a bit jarring. It seemed much too modern for a story that I don't think was meant to be overly modern in its retelling.

While this was an overall enjoyable read, I found myself wondering what exactly the point of this retelling was. Was it merely to add in some insight into the character of Telemachus, or was there meant to be something more?  For the most part, I otherwise felt that this was quite literally a basic retelling of the Odyssey with some extra information about what Telemachus may have been experiencing at the same time. I think I was both expecting and hoping for a fresher perspective on this story, so I ended up being left with slight disappointment. Despite this, I cannot fault the writing or strength of the story, which was still certainly entertaining and a lovely story. I would easily recommend this for anyone unfamiliar with the original story, or who is a fan and wishes to read another version. (I must insist, though, that the original be read at some point as well, because it is truly a masterpiece. :) )

Overall, I am giving Ithaca three-and-a-half stars for its readable and flowing prose that retells a classic in a delightful and entertaining manner.

You might also like:
Helen of Troy by Margaret George
Cleopatra's Shadows by Emily Holleman
Legacy of Kings by Eleanor Herman
Posted by Jordan @ForeverLostinLiterature at 8:42 AM