Waiting on Wednesday: Feast of Sorrow by Crystal King 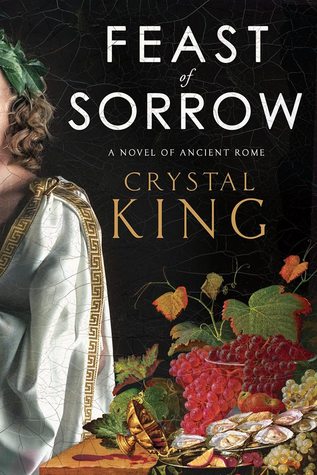 Set amongst the scandal, wealth, and upstairs-downstairs politics of a Roman family, Crystal King’s seminal debut features the man who inspired the world’s oldest cookbook and the ambition that led to his destruction.On a blistering day in the twenty-sixth year of Augustus Caesar’s reign, a young chef, Thrasius, is acquired for the exorbitant price of twenty thousand denarii. His purchaser is the infamous gourmet Marcus Gavius Apicius, wealthy beyond measure, obsessed with a taste for fine meals from exotic places, and a singular ambition: to serve as culinary advisor to Caesar, an honor that will cement his legacy as Rome's leading epicure.Apicius rightfully believes that Thrasius is the key to his culinary success, and with Thrasius’s help he soon becomes known for his lavish parties and fantastic meals. Thrasius finds a family in Apicius’s household, his daughter Apicata, his wife Aelia, and her handmaiden, Passia whom Thrasius quickly falls in love with. But as Apicius draws closer to his ultimate goal, his reckless disregard for any who might get in his way takes a dangerous turn that threatens his young family and places his entire household at the mercy of the most powerful forces in Rome.


Another historical fiction book set in Ancient Rome? A story centered around upstairs-downstairs politics of the household and a chef? Sign me up! There are so many things that catch my eye about this one and I can't wait for its release next April! (which seems ages away...)

Get more reviews and bookish fun in your inbox and subscribe to Forever Lost in Literature!
Posted by Jordan @ForeverLostinLiterature at 7:27 AM