Pit Bull: The Battle over an American Icon by Bronwen Dickey 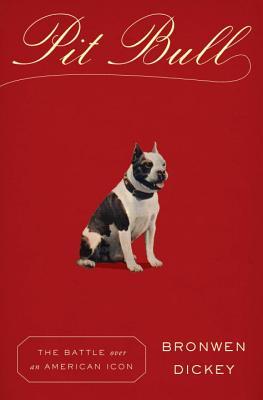 I have seen many media headlines and articles that attack pit bulls as being instinctively aggressive and dangerous dogs, and I have also interacted with people who have deep prejudices against them, but I have never been quite able to fathom why this is the case. Sure, they've attacked people, but so have golden retrievers, German shepherds, Wiemereiners, and any other number of dogs - it's not limited to only one breed. In Pit Bull, Bronwen Dickey draws attention to all of these issues while also exploring the history of pit bulls and their role through American history, drawing light to various fads and the changing opinions of them over decades.

The first and most surprising thing I learned from this book was that the term "pit bull" is a rather loose and much more vague term to describe this breed than I could have ever imagined. The term that most people use for "pit bull" actually encompasses about four distinct breeds, and this label is often wrongly applied to a wide array of dogs. From this chapter on, I knew I would be hooked on the subject matter of this book,

Dickey's writing is immensely engaging, and it reminded me quite a bit of another powerhouse nonfiction writer whom I love - Candice Millard - which only proved to further my enjoyment. Dickey writes with passion, confidence, and a strong desire to impart as much well-researched information as possible. She leaves no stone unturned and provides not only anecdotes in defense of pit bulls, but also stories that do portray them somewhat negatively in attempt to further prove her argument - all of her research and experiences only prove that there is a vast unearned bias against whatever constitutes a pit bull. Dickey's writing is fluid and engaging, interspersing the perfect amount of facts and statistics with anecdotes and explanation to create a wonderful balance that makes this book incredibly interesting to read.

Dickey uses personal interviews, empathy, hard scientific facts, and true historical information to both explain and attempt to understand how pit bulls have been viewed among society and how that image has evolved in such extreme ways. I was particular fascinated by a chapter on genetics, which explained that the physical appearance of a dog does not necessarily correspond to its genetic makeup, and that many breeds are misidentified as pit bulls simply because of their features. It was also interesting to briefly learn about other dog breeds that also underwent prejudice and intense fear mongering, such as Dachshunds and Dobermans. Another large theme that Dickey brings to light is the relation between pit bull breeds and racism, which was incredibly eye-opening and really made me think about both of these issues in a greater light, which I truly appreciate.

There are so many factors that go into this misinformed prejudice of pit bulls, and I felt that this book not only did a wonderful job explaining that issue, but also brought up so many other important discussions about society and the media that make this a must-read for just about anyone. I learned about much more than just pit bulls.

I do think that opinions of pit bulls are changing, but that it will continue to move at a slow pace. It is still difficult to obtain homeowner's insurance if you have any number of dog breeds that fall under the 'dangerous liability' realm, which often includes German Shepherds, Rottweilers, Dobermans, and of course, Pit Bulls. Overall, I'm giving Pit Bull five stars for all of the reasons stated above; this book is incredibly enlightening and I will certainly be recommending it to everyone I know (and maybe even those I don't know). I hope that Dickey continues to write more incredible books like this!