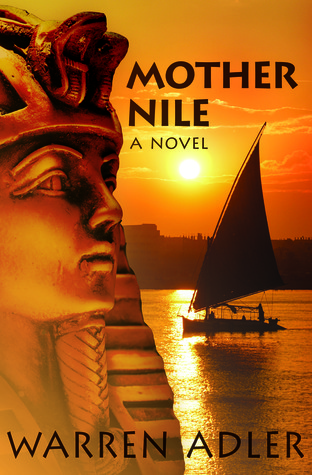 *I received a copy of Mother Nile in exchange for an honest review.*

This is my first novel by Warren Adler, and I must say I am very impressed. I had no idea what I was getting into with Mother Nile, but I have seen many people praise and enjoy his other novels, so I felt fairly confident going into this one.

Within the first two chapters, I could tell that this was going to be a very honest, blunt book, and I appreciated that. I could tell that the author was not going to shy away from any topics that may be awkward or uncomfortable for some people, and I like it when authors decide to take risks or refuse to cover anything up. There is some violence and sexual scenes depicted throughout, but none of it is unwarranted. Everything has a purpose, and I think that is truly what helps to set Warren Adler apart from other.

Mother Nile is a complicated story of familiar relationships, power, and politics. It is a story that requires your complete attention in order to make sure you are following along and understanding the complicated political situations within the state. Adler paints vivid, raw pictures of the settings he describes. Egypt is shown with no frills attached, and his descriptions are so strong that I felt as if I could actually imagine myself there in this exact setting.

The characters Adler develops are quite a varied bunch, and I really enjoyed exploring each character's background and impact on the story. Si, short for Osiris, is our main character who is searching for his long-lost half-sister, Isis. I felt as if Adler grabs his readers and throws them right into the action and lives of his characters, which actually worked rather well. Si is a headstrong man who is shown to have fierce determination, and although he is not necessarily a perfect man by any means, I felt myself beginning to understand as the story progressed.

I also enjoyed reading Farrah's story. If you think Si is a strong character, just wait until you meet Farrah. This woman is tough, and she is forced to make a lot of extraordinarily difficult decisions throughout the book. The only problem I had with her character was that I never really felt like I knew who Farrah was. While we did get some insight into her thoughts, I didn't always feel like I was getting to see her from more than a surface level, and because of that I didn't necessarily understand all of her motivations and reasoning for things, or why she acted certain ways.

Adler is clearly a talented writer, and he writes with well-practiced ease, making it a true breeze to read through his story. I also appreciate that he appears to have done thorough research on his settings and history, and although I am not particularly knowledgeable about the time, it is still readily apparent that this is the case. He knows how to set a scene, deliver a twist, and keep you hooked.


Posted by Jordan @ForeverLostinLiterature at 1:49 PM