There are a lot of books in the world. And within those books are a lot of series, many of which sound amazing and I really want to read, but simply have had the time -- or I'm too intimidated -- to start them. Here are just a select few of some of the series that I'm dying to read. What do you guys think?

I'm almost ashamed to admit that I haven't started this series. I've honestly been meaning to for years now, but for some reason I just haven't. I think that there is a small part of me that worries I won't find them as funny as everyone else does, but I don't think that will actually be an issue. Here's to hoping I get to this series soon!

Malazan Book of the Fallen by Steven Erikson
If you know anything about the Malazan series, then you can probably understand why I've been putting this one off. To be fair, I have started the first book twice and ended up putting it down both times. I can understand why it's one of the top fantasy series out there, but I just get so confused and lost when I try to make sense of everything... one day, Malazan, one day. 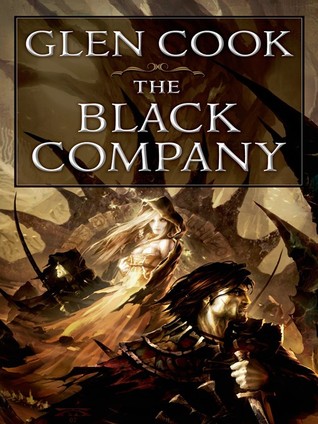 The Black Company by Glen Cook
This is just another great fantasy series that I've heard great things about and I would really like to start. It sounds pretty exciting, and I'm always up for some good fantasy.

The Mists of Avalon by Marion Zimmer Bradley
The King Arthur legend is one of those stories that I know the vague details surrounding it, but that I've neglected to ever fully read about. I've heard that The Mists of Avalon is an awesome series that retells the legend through the eyes of some of the women involved, and I just really want to read this one!

Loom Saga by Elisa Kova
The Loom Saga just sounds so unique and compelling, I've been really dying to get my hands on a copy of the first book, The Alchemists of Loom. If I'm not mistaken, the second book comes out this July, so now would be a great time to get on board!

The First Law by Joe Abercrombie
Key words I've heard to describe this series are 'dark,' 'depressing,' 'violent,' and 'gritty,' and well, that sounds just about right for me. I think I'll have to be in the right mood to start this series, but I have a good feeling that I'll really like it.

Alexander the Great Series by Mary Renault
If you know me, you know I love Alexander the Great and reading about him. I actually read the first half of the book a few years ago and I'm not really sure why I put it down, but what I do know is that I want to read through this series! Renault has a lovely writing style that just flows in such a poetic manner.

Outlander by Diana Gabaldon
Yes, I want to see what all the fuss is about this series! I hear so many good things about it (and some bad, to be honest) and I am just dying to see what it's all about. I'm not normally much of a time travel fan, but I think it'll work it out alright.

The Abhorsen Series by Garth Nix
Another one that I'm embarrassed to say I've never really gotten started on. Like a few others, I've read most (?) of the first book, but I don't really remember much. I remember being somewhat disappointed and not liking it as much as I thought, but I'm hoping things will be different when I try to restart this series.

Warrior of Rome by Harry Sidebottom
Honestly, I know very little about this series other than the fact that it's in an Ancient Rome setting. I'm also looking for good ancient Rome/Greece books, so I'm completely ready to check this one out.

The Last Kingdom by Bernard Cornwell
I've had the first book on my Kindle for ages and I've never read more than 30% of it. I love Viking stories, Bernard Cornwell is highly praised, and this is already a series that I always watch on Netflix, so I definitely want to get started on this series!